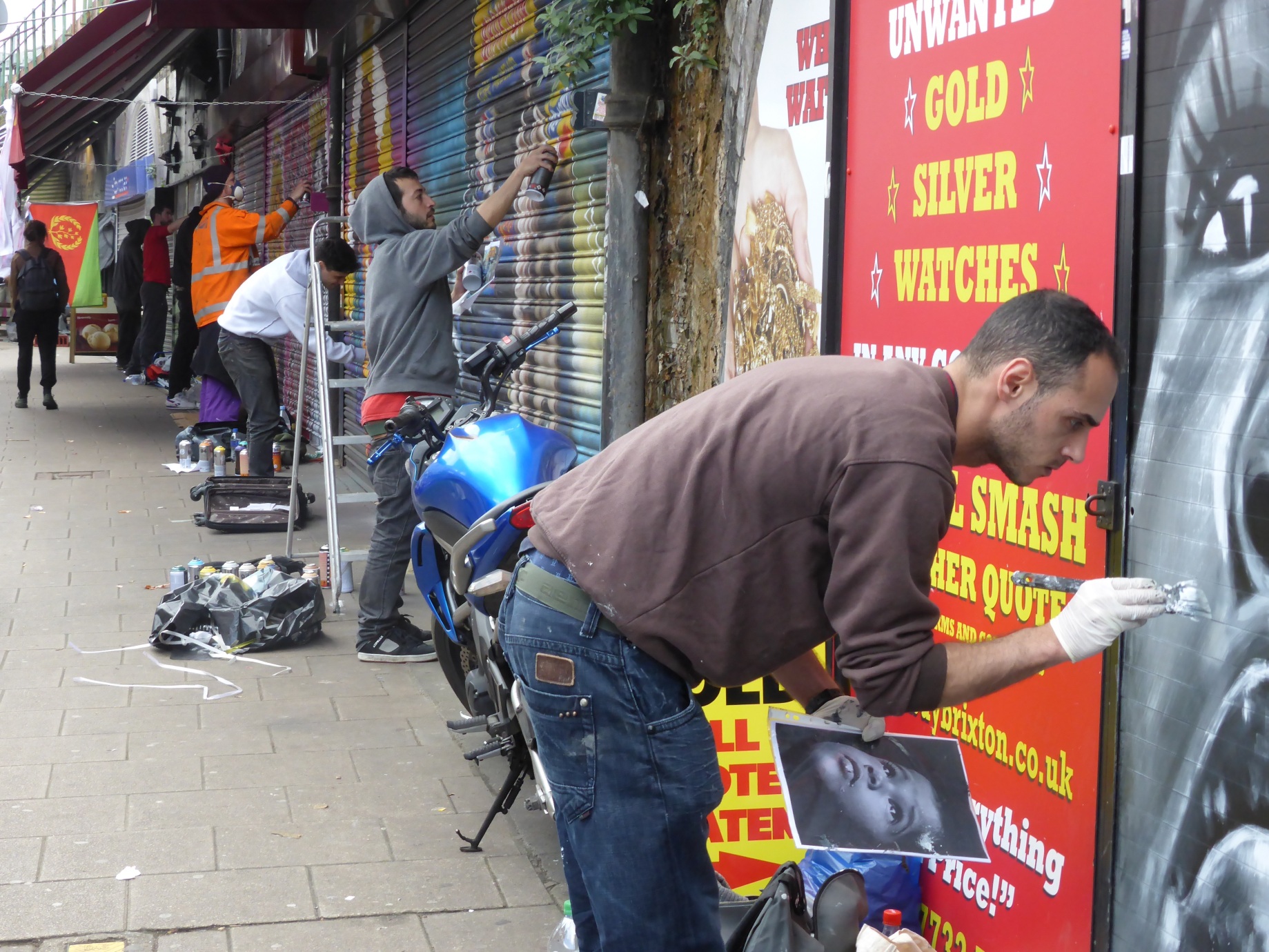 Yesterday in Brixton the event RECLAIM::BRIXTON took place in Windrush Square, in the public space in front of The Black Cultural Archives and in the shadow of Lambeth Town Hall. In this space several communities gathered in congregation from noon to 5pm in order to celebrate the communities love for their area. As part of this demonstration the independent traders in the Arches of Atlantic Road and Brixton Station Road closed down their shutters from noon to 2pm in order to highlight their proposed evictions. Since launching the campaign to SaveBrixtonArches, the petition has raised over 21,000 signatures thus far. In this time frame the affected shopkeepers displayed large banners in front of their premises bearing messages to both their landlords and to Lambeth Council. They were joined by hundreds of local residents and customers who set to form a human chain around the site to show their sense of unity. 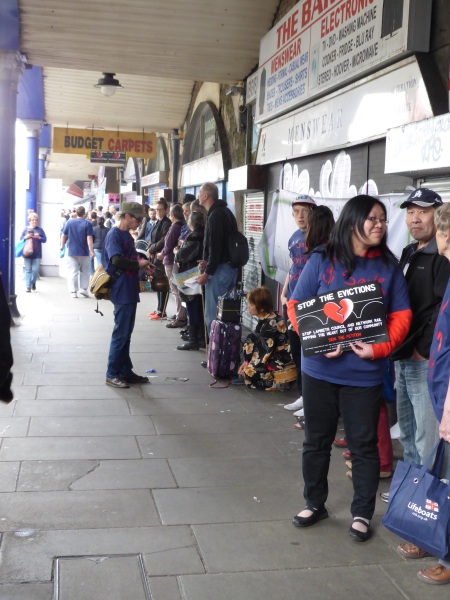 In conjunction with this, the latest installemt of Street Art additions were laid out In this narrow time frame, in which there were eight of London’s resident Street Artists down with six shutters and one set of boarding to be painted in the process. The artists had a mere two hours to lay out their work, it was very much Get Set and GO. But this didn’t thwart the artists in question one bit, each contributor stepped up and worked their magic, leaving a fine set of further additions to the incredible Street Art gallery that is emerging along the Brixton Arches, all to show both Network Rail and Lambeth Council that their plans do not have the consent of the community, 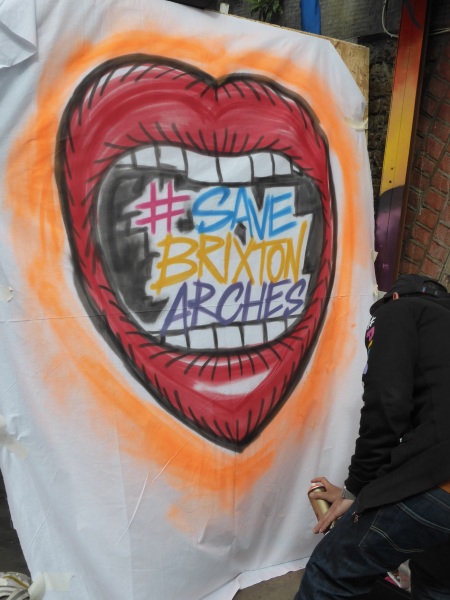 Organizer of the Street Art project PINS laying out a quick logo for a banner to be used in the demonstration. 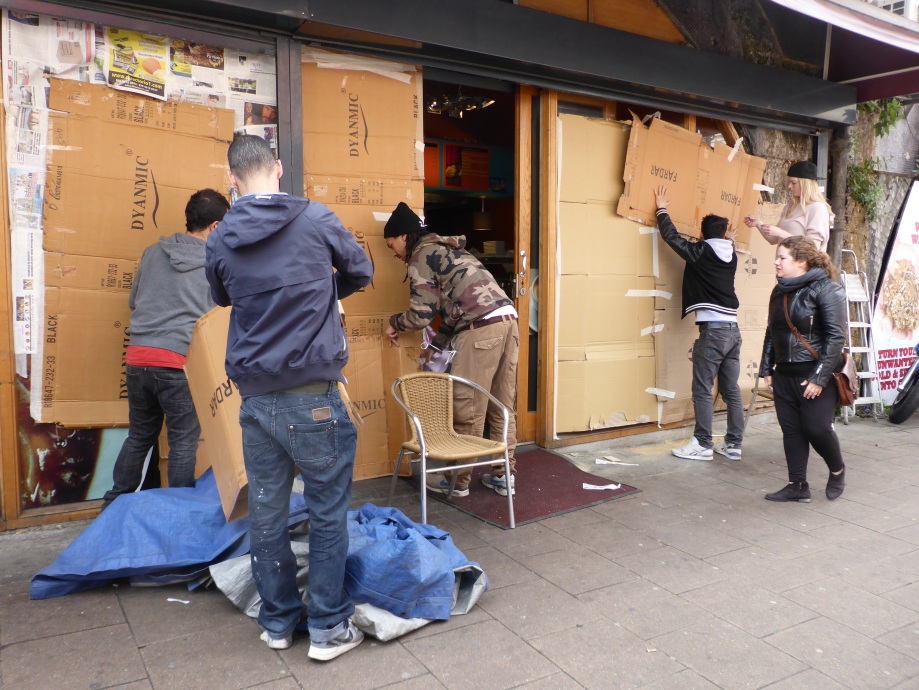 Artists and residents joining together to get some cardboard up to prevent the glass behind the shutter being damaged by the paint. 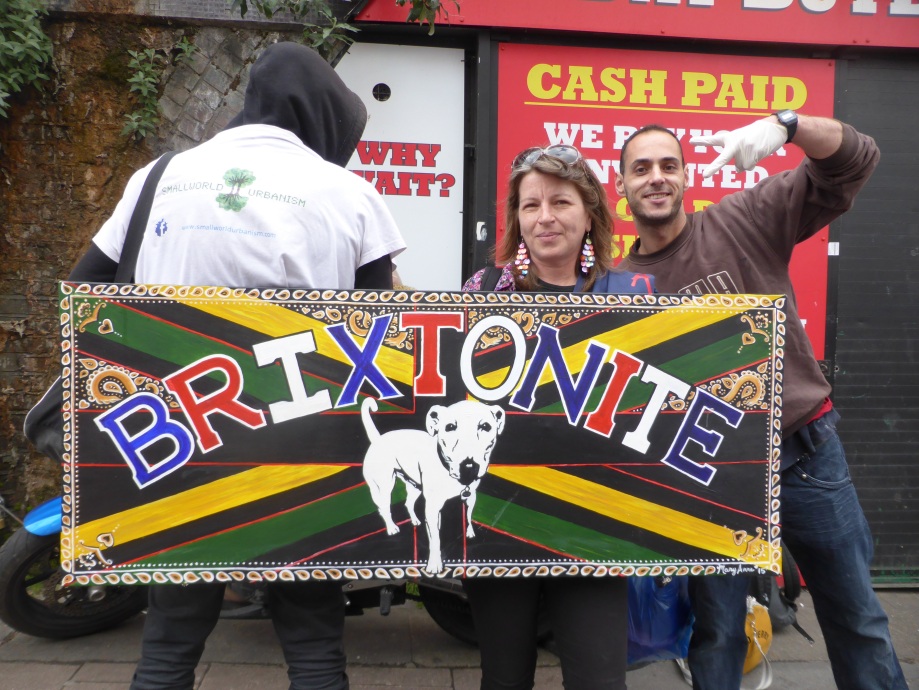 Local residents with their hand made sign, being joined by Furia. 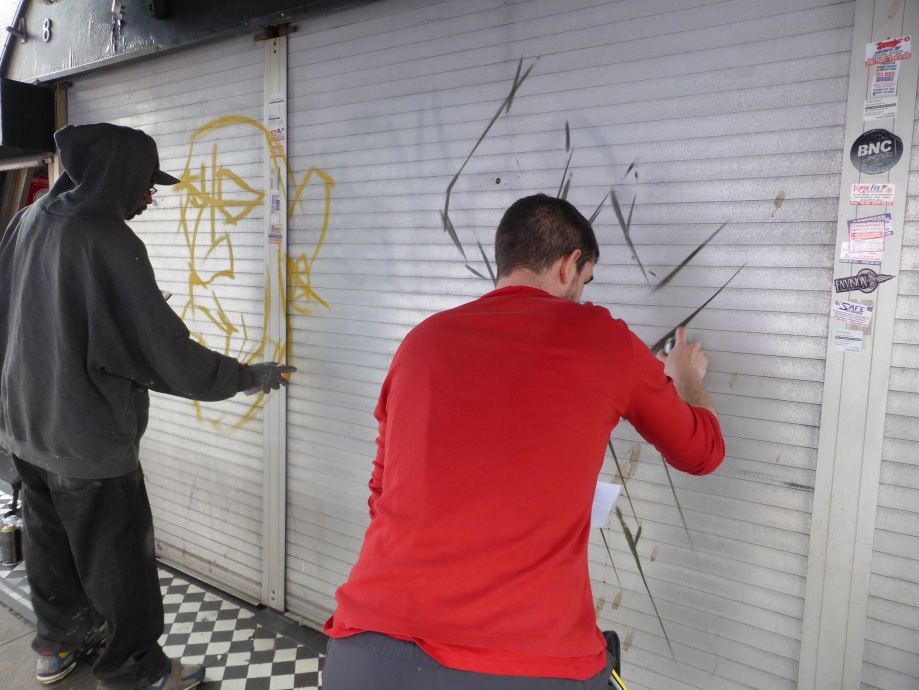 Jeba & Juan2 starting out their pieces. 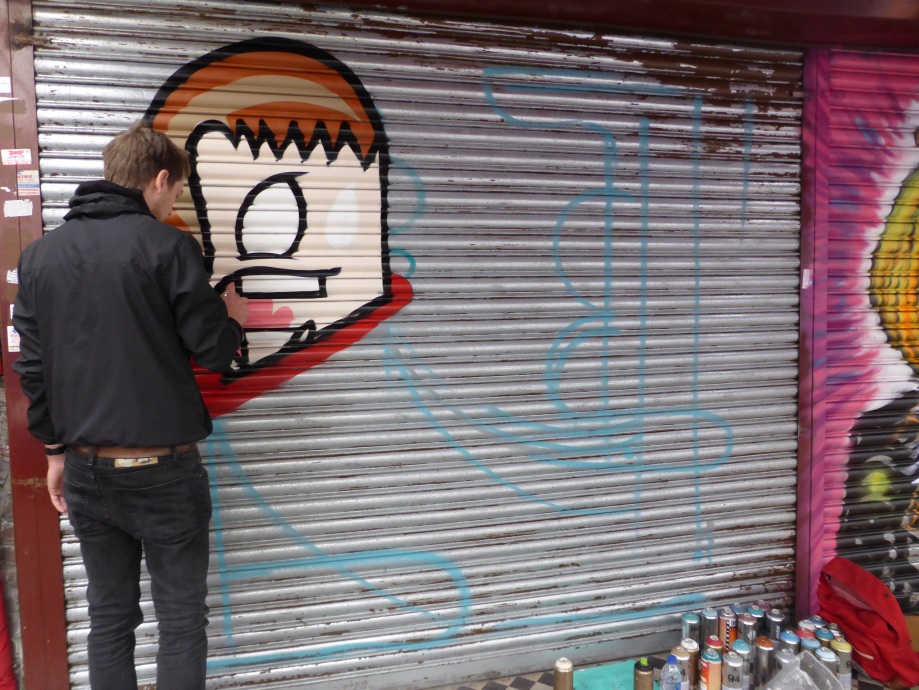 Vova Zomb starting out his work. 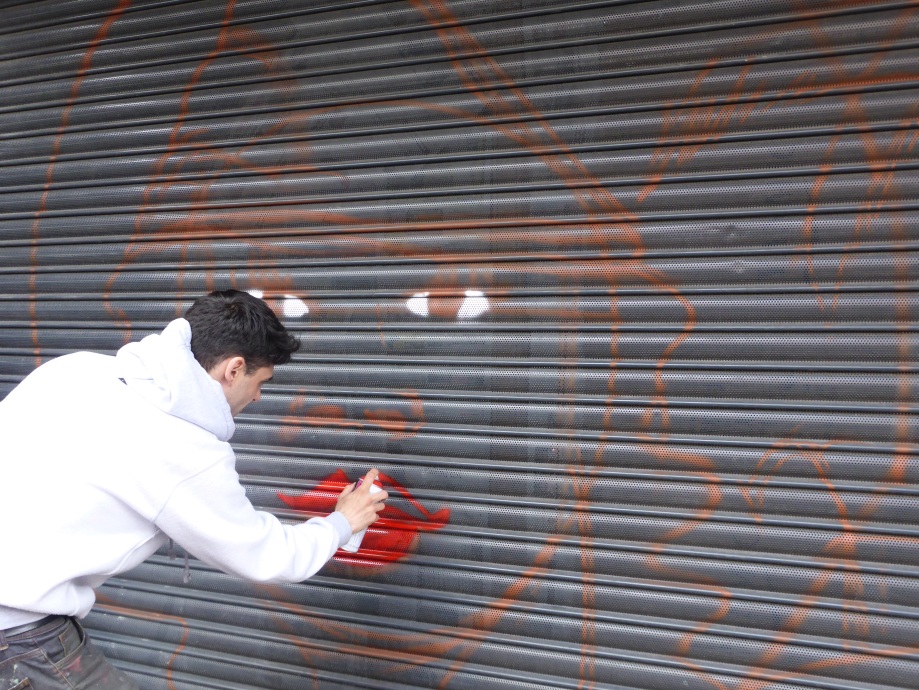 Jay Kaes getting his piece under way. 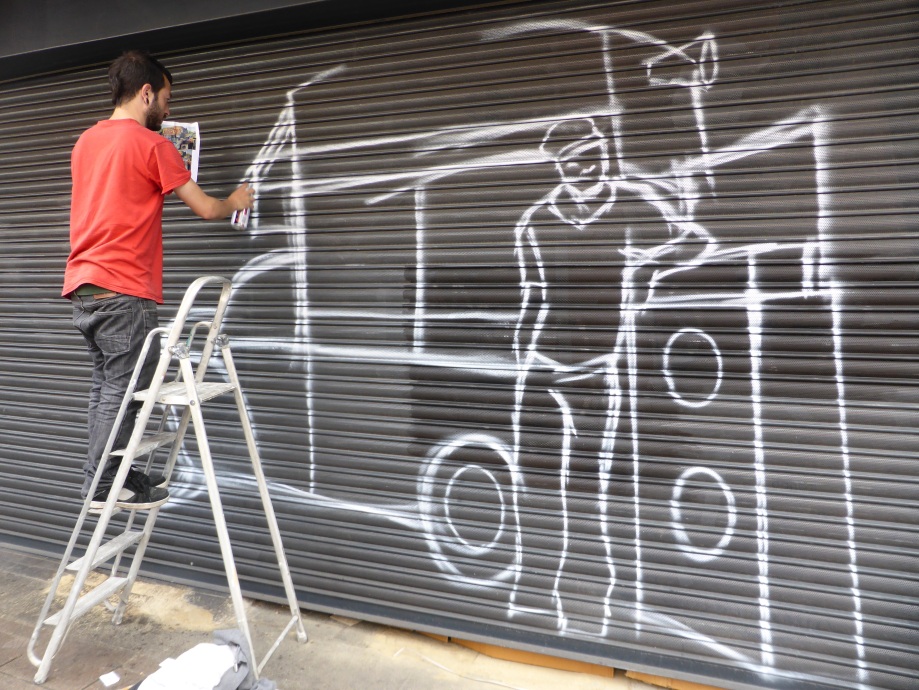 Core246 getting his piece started. 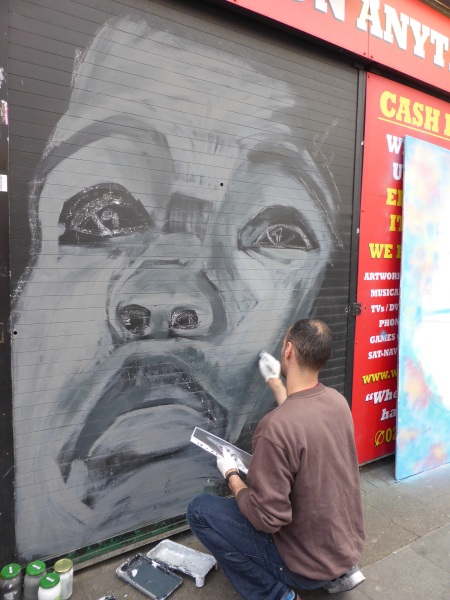 Furia quick to get his intital outlines down. 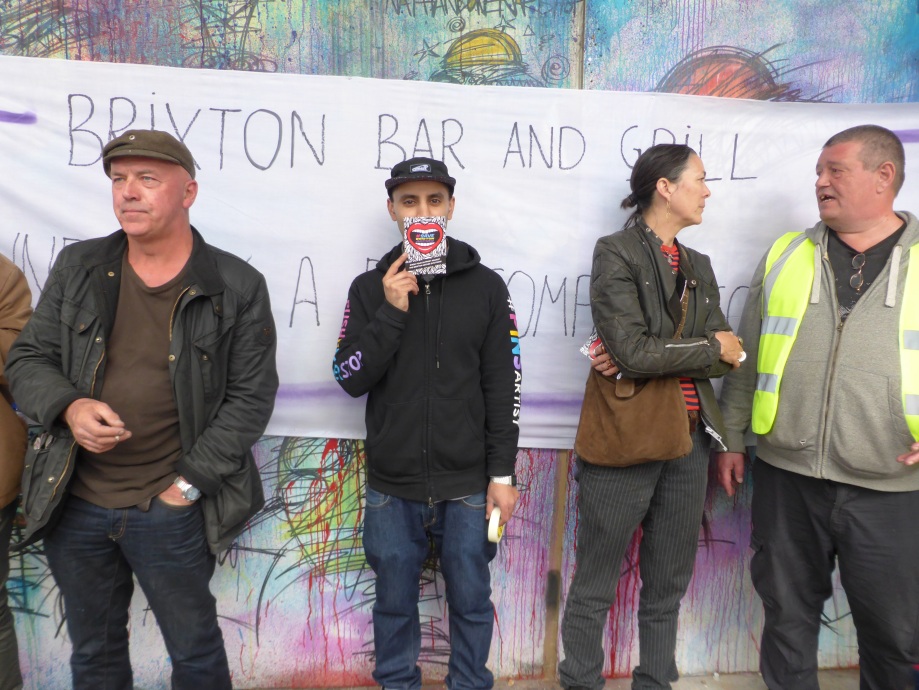 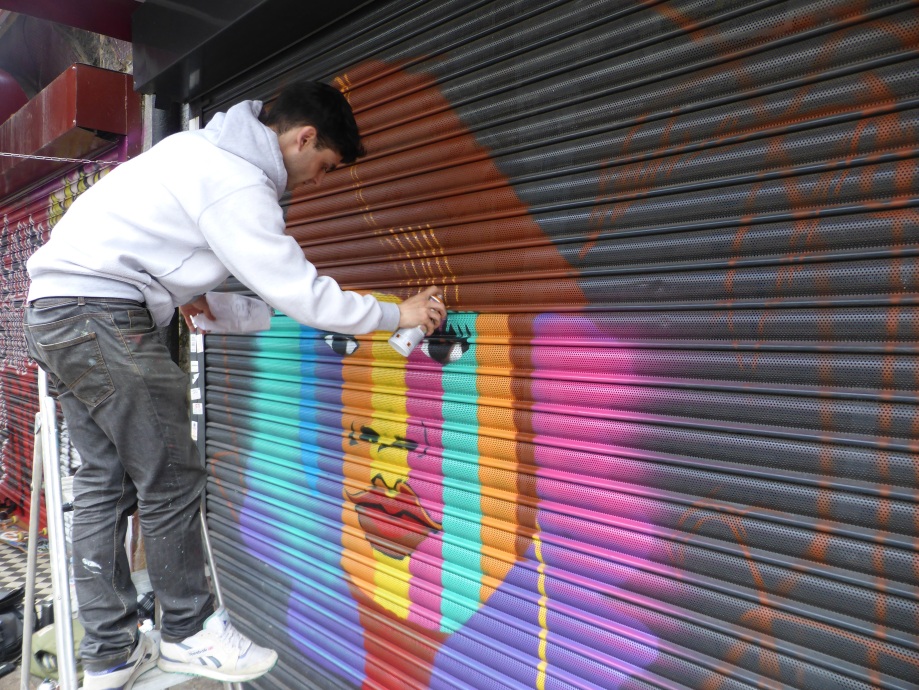 Jay Kaes adding the initial colours to his colourful portrait. 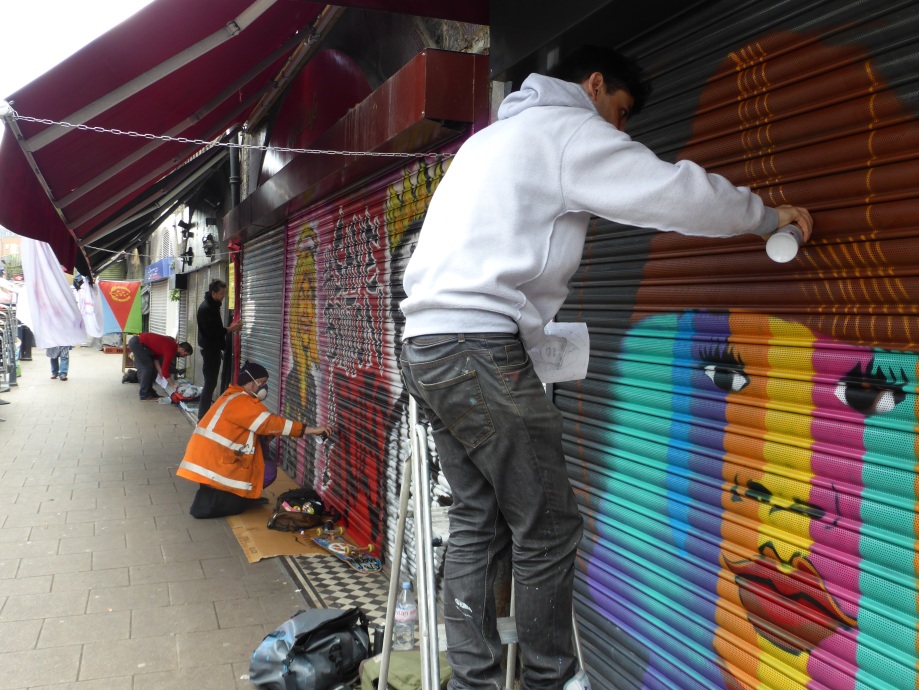 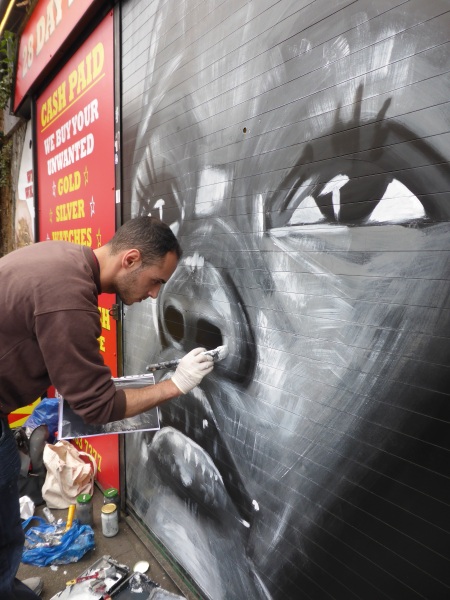 Furia at work on the finer touches to his piece. 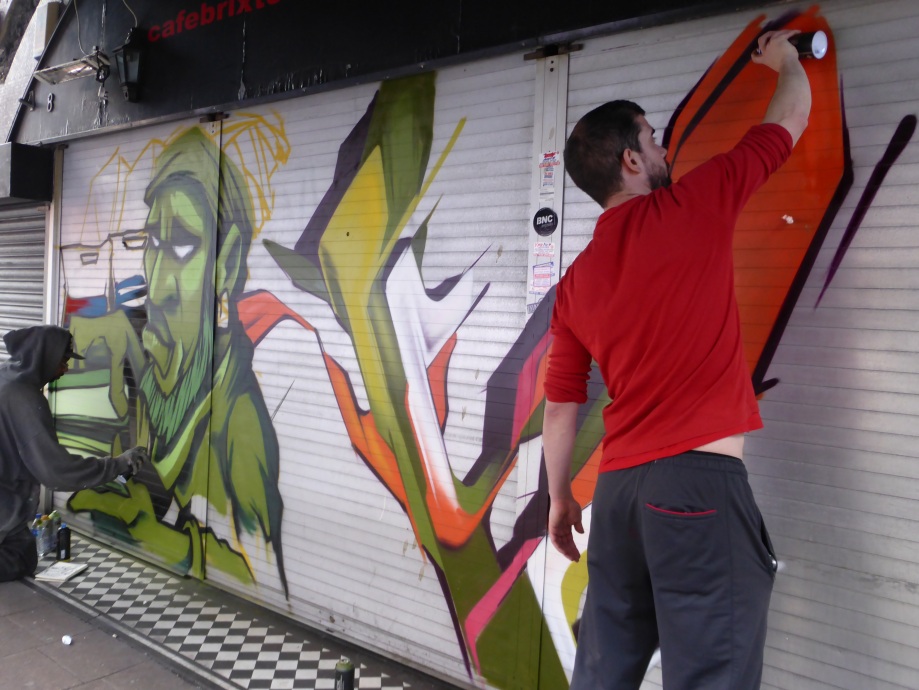 Jeba & Juan2 at the half way mark on their shutter. 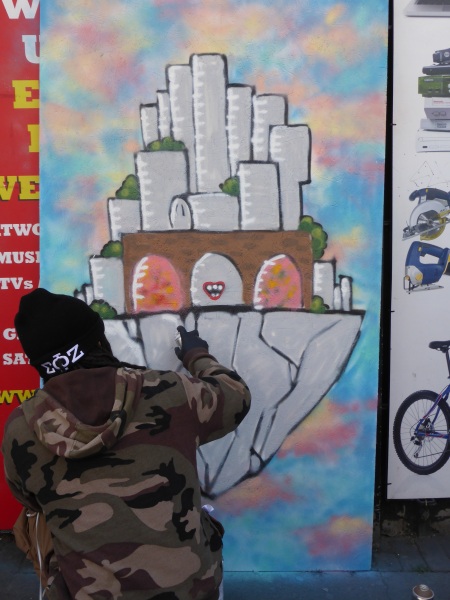 Zayr Luciano at work on his board. 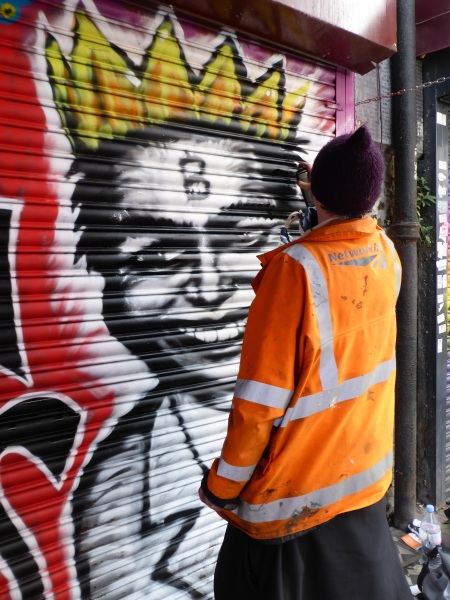 Morganico at work in his acquired Network Rail jacket. 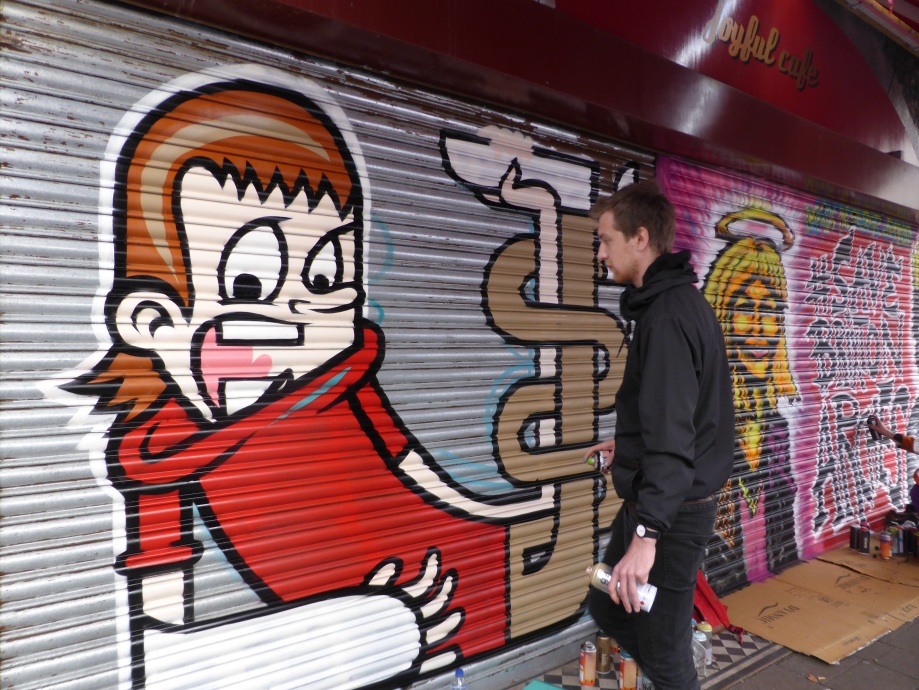 Vova Zomb nearing the end of his work. 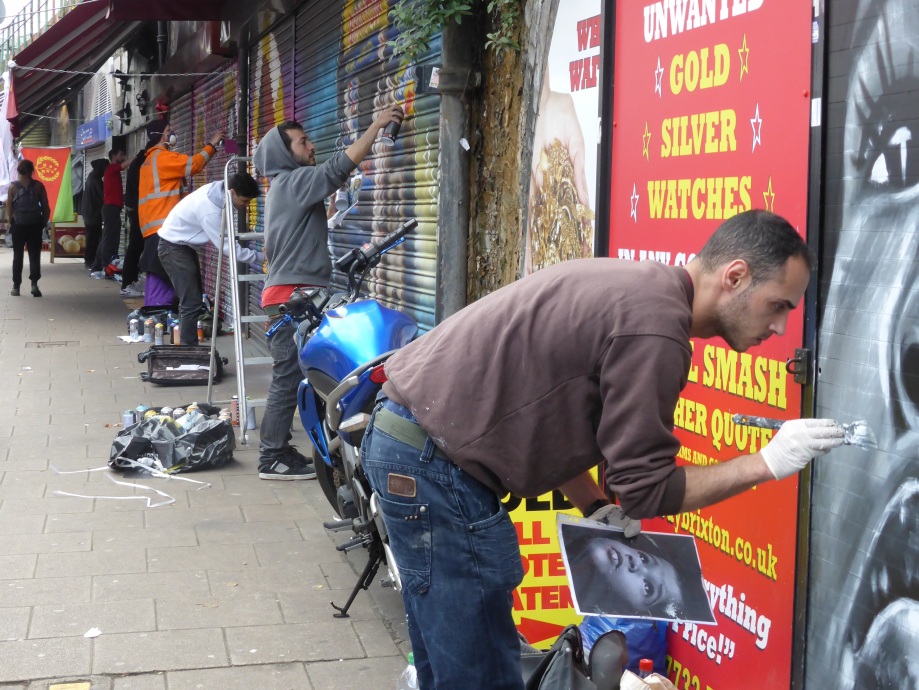 Street Artists at work as far as the eye can see. 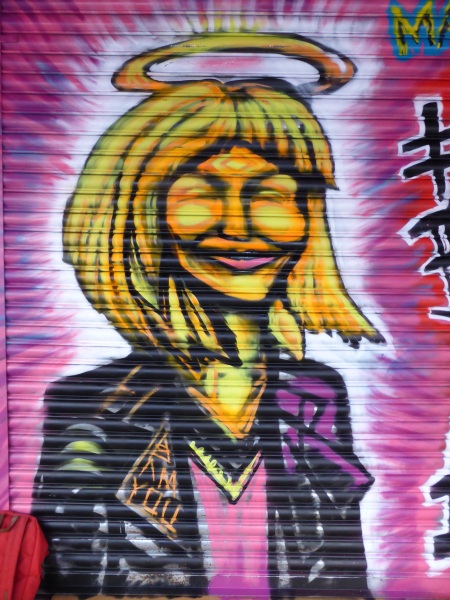 Detail of Morganico’s finished work, which he had been working on the previous day also. 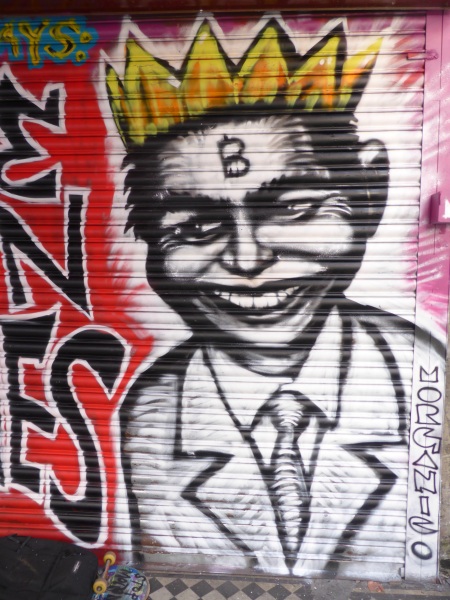 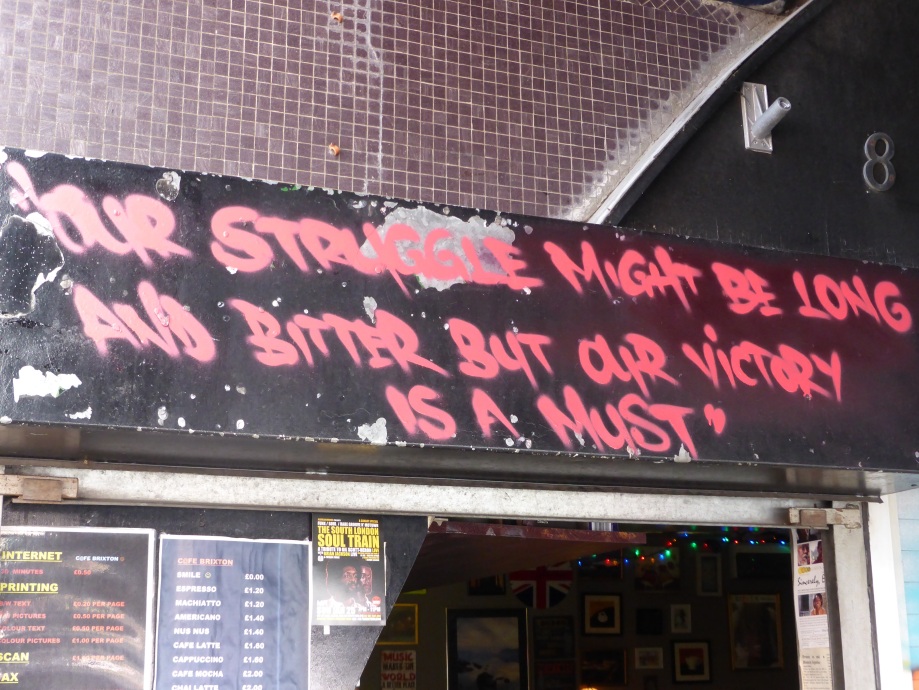 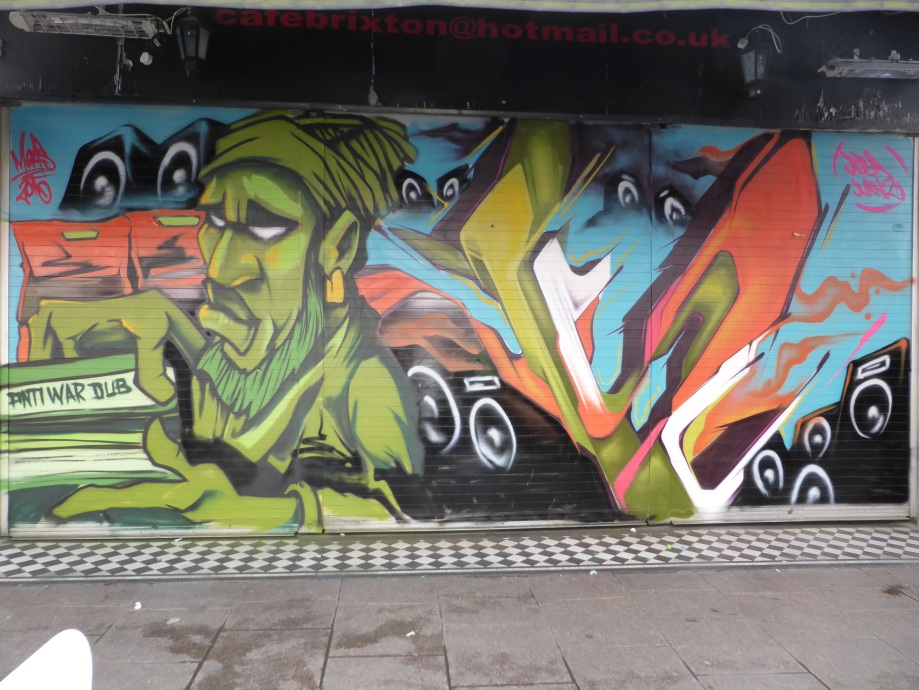 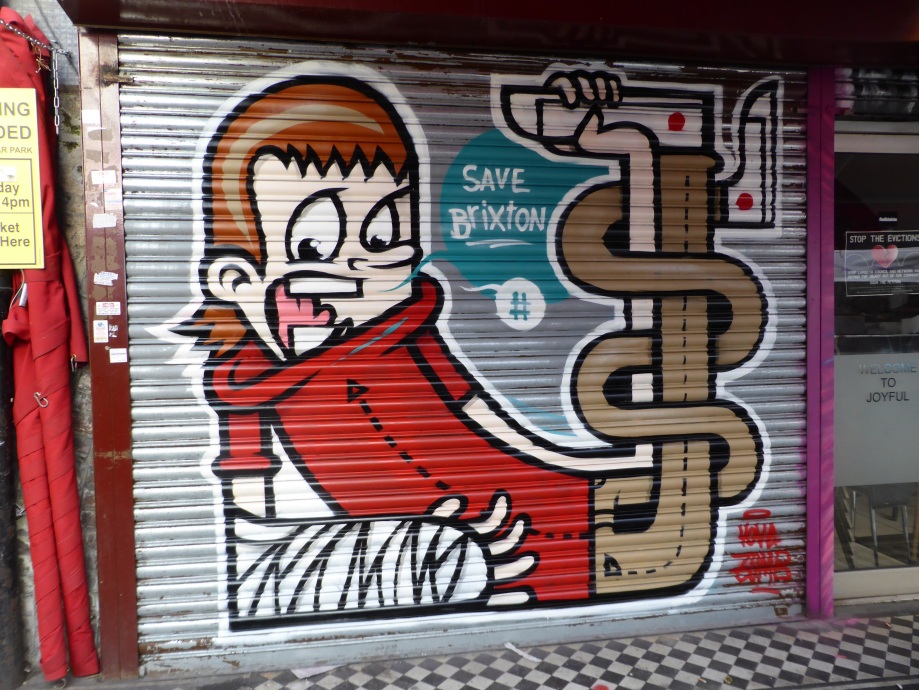 Vova Bomb’s trademark character in a humorous and fitting addition to the Arches. 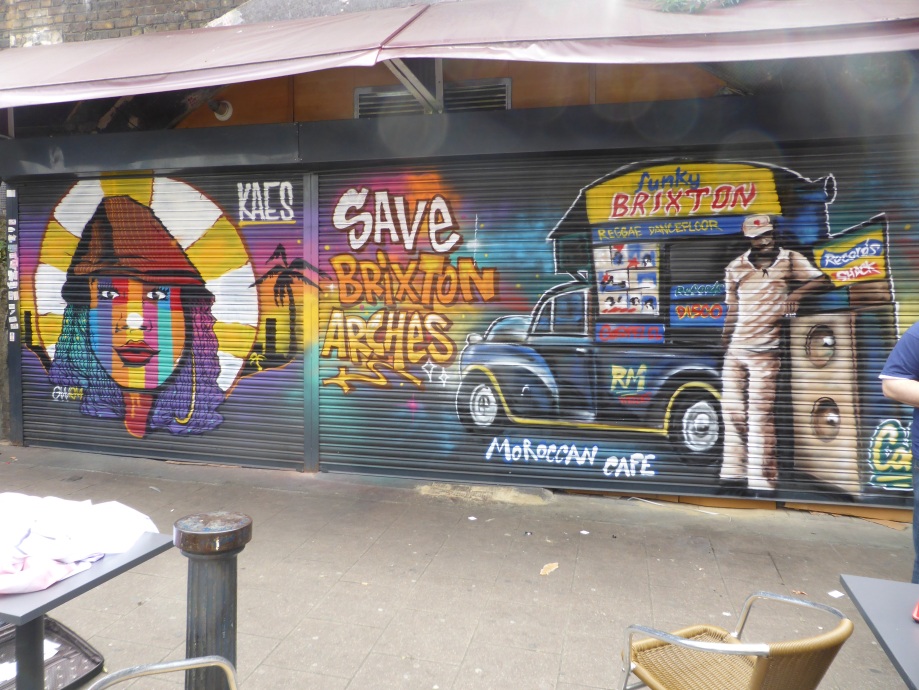 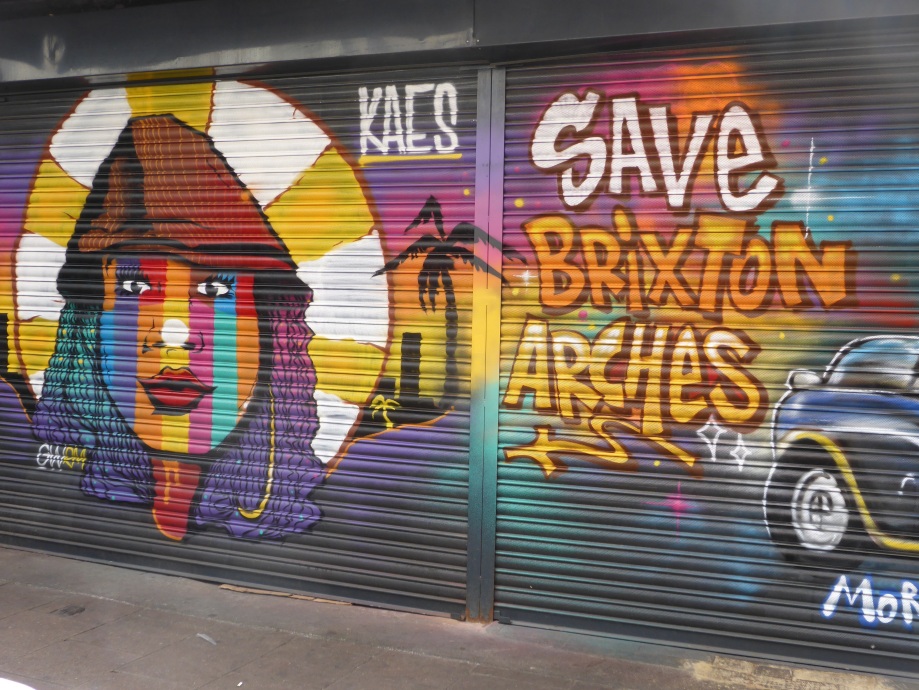 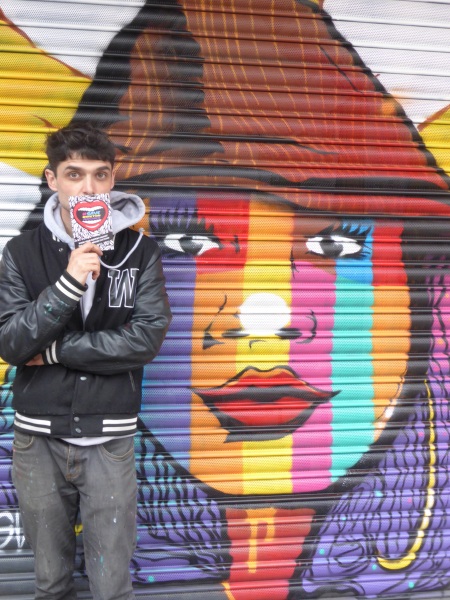 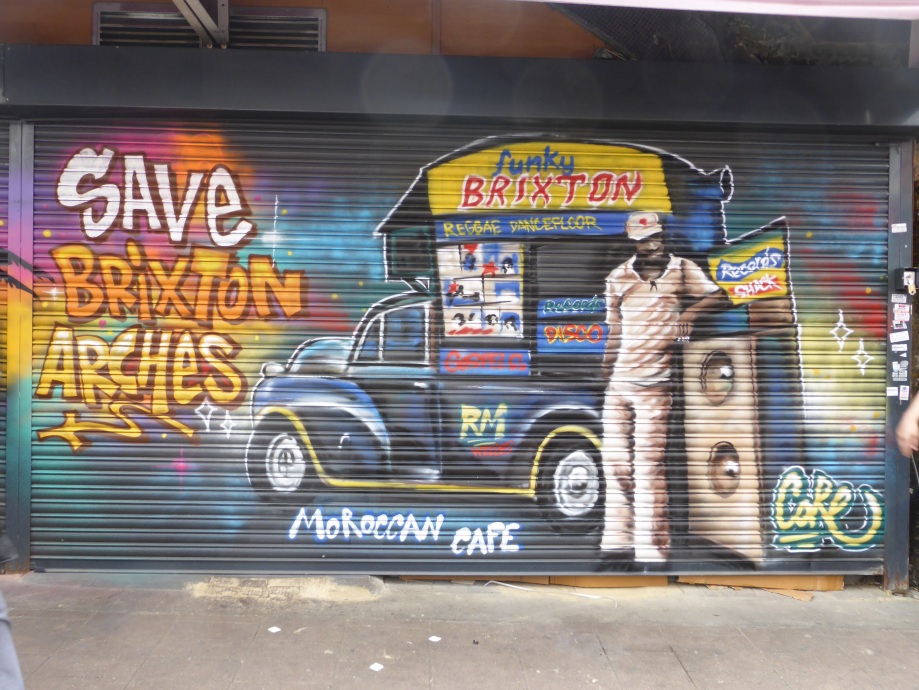 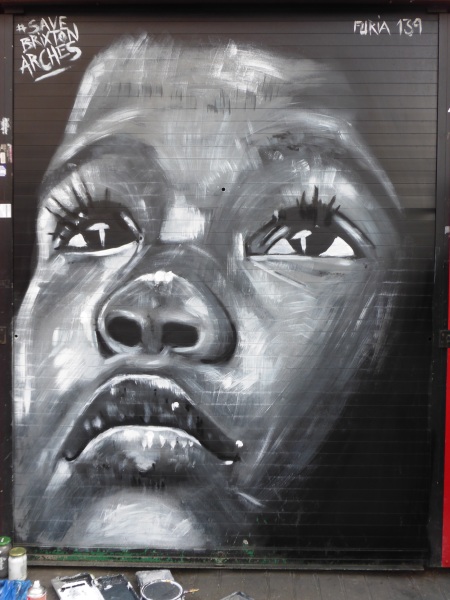 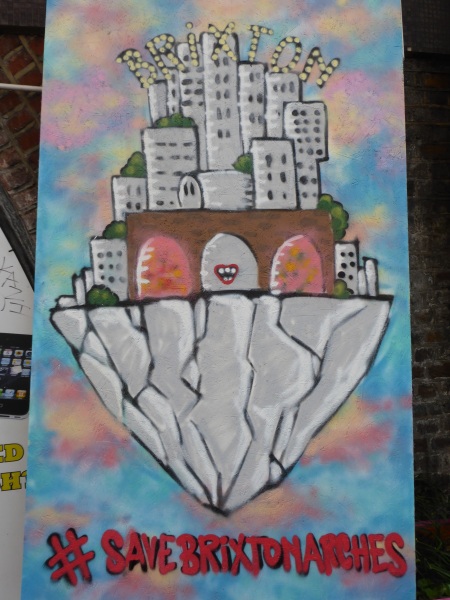