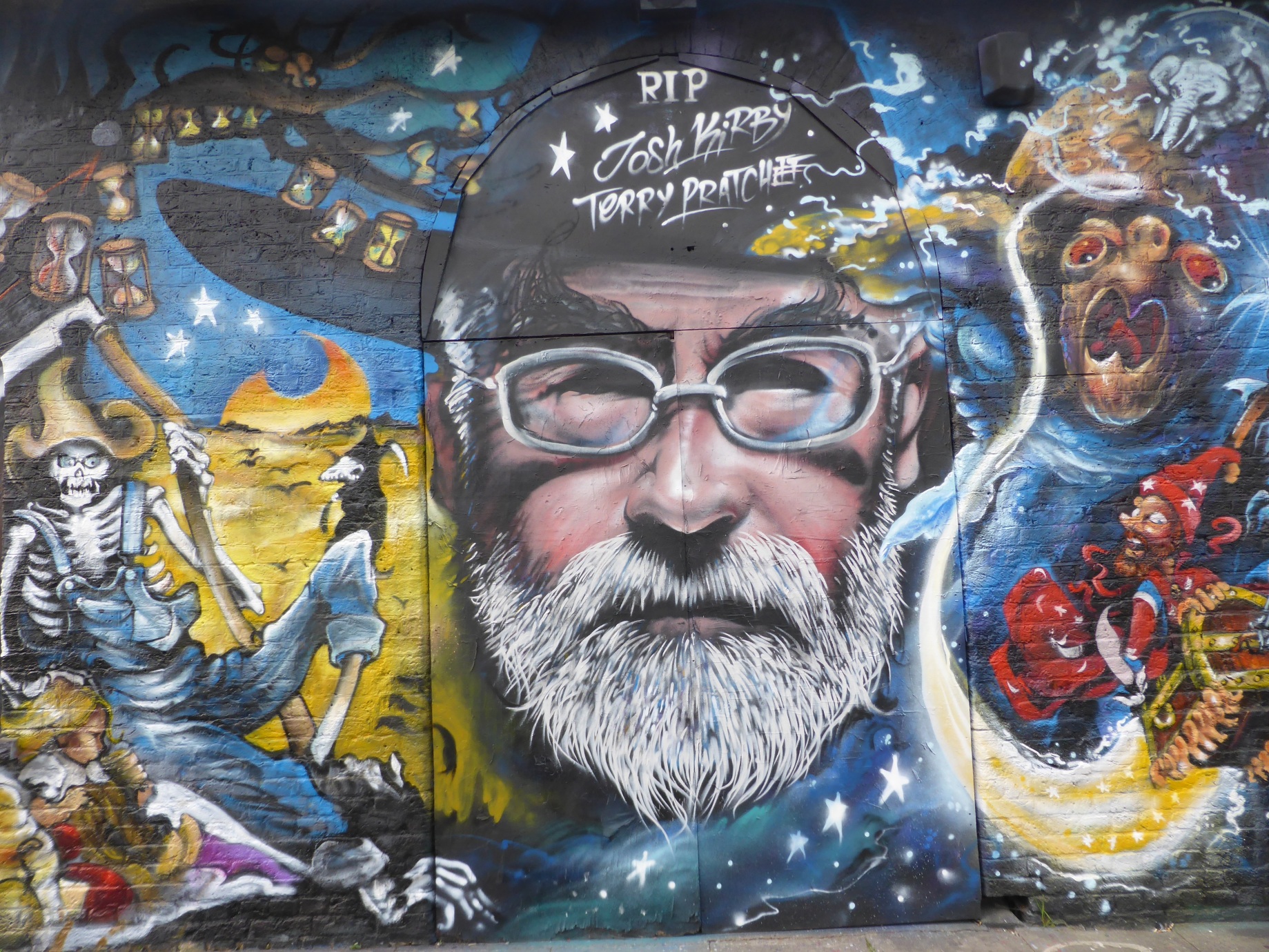 Over the last month or so, at varying intervals, Street Artists Jim Vision and Dr Zadok have laid out in the East End, an incredible large scale and magnificent tribute to the Author Terry Pratchett who sadly passed away from Alzheimer’s some six weeks back now, aged 66 and Josh Kirby, illustrator of an incredible twenty-six  front cover works to the Discworld series, who passed away in 2001, aged 72. We have long been immense fans of Terry Pratchett’s authorship here and the trademark front covers that adorned his first twenty-six novels courtesy of Josh Kirby. Since creating Discworld with the publication of The Colour Of Magic in 1983, he wrote two books a year on average. It is for this reason that we have been blessed with so many fantastic novels and tales from Discworld. For us here no other author has so expansively built up a story of a place and its peoples, let alone in such a humorous manner. Upon the news of Terry Pratchett’s sad passing Jim Vision and Dr Zadok decided to pay tribute to the duo of Josh Kirby and Terry Pratchett, the best way they know how, by painting. Bringing life to just a snapshot of the vast story Pratchett created, paying homage to all the joy Discworld has brought them. In turn, upon stumbling upon the piece when being constructed, i instantly smiled and felt touched, a delight that someone was paying tribute to this incredible duo. Without further ado enjoy the exceptionally touching piece of Street Art. 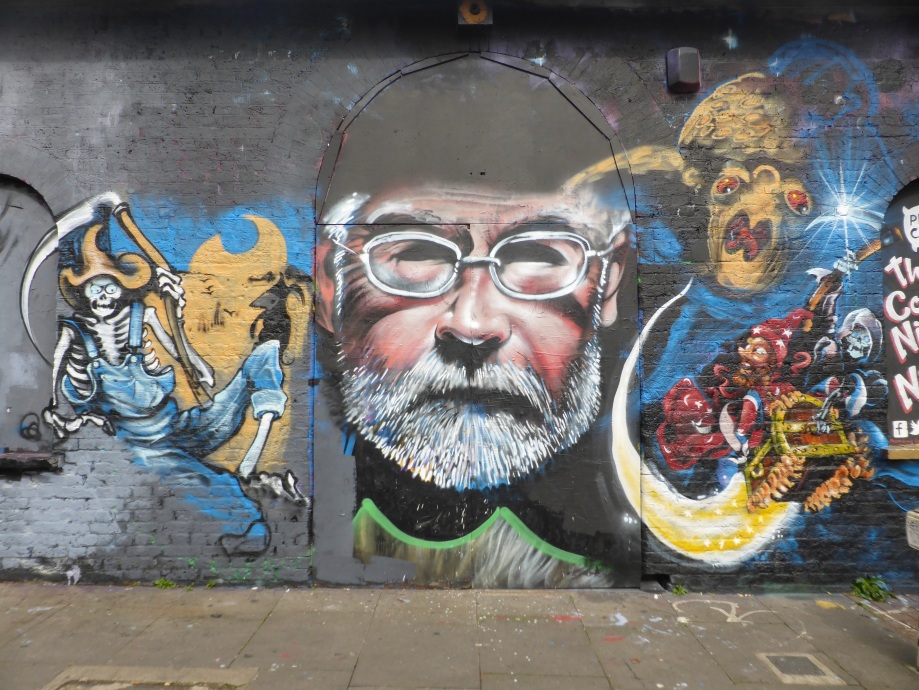 Work in progress in the early stages several weeks back.

Centre piece taking shape a couple of weeks ago.

This shot doesn’t include a third of the entire work by this pair. Incredible effort and tribute indeed.

Now starting from left to right, we shall show you the various components of this incredible piece, you can really see the effort involved, a clear labour of love by the artists for the work of Terry Pratchett & Josh Kirby. 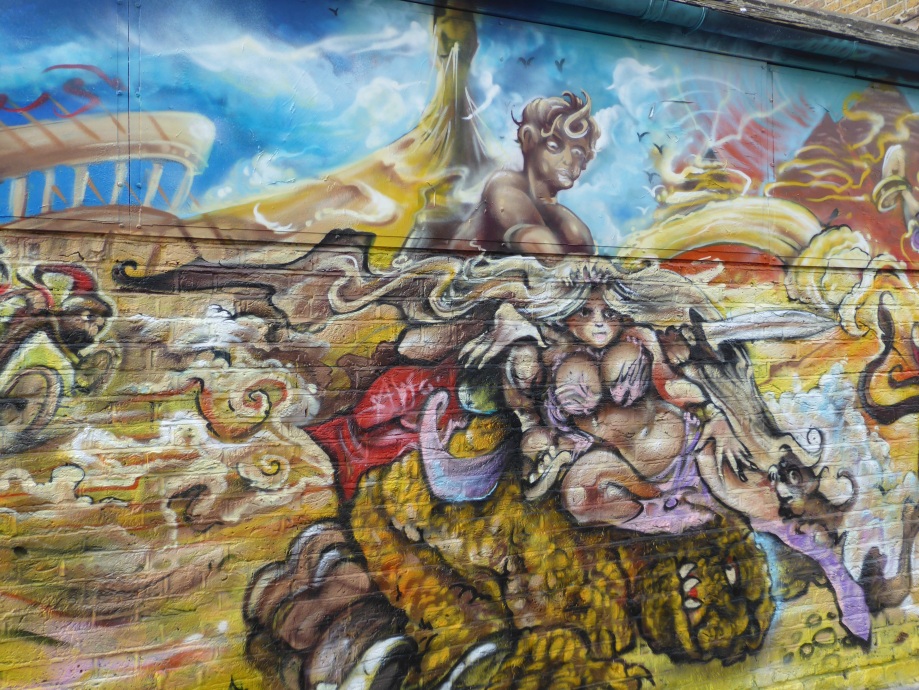 Depiction of the artwork to the front cover of Pyramids.

The centre piece of this incredible work. Says all it has to. 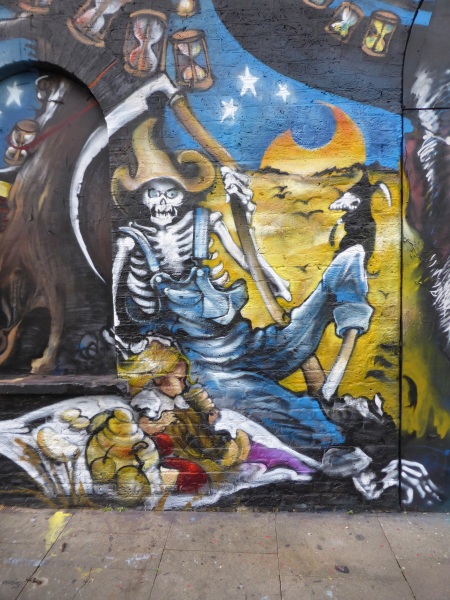 Depiction of Josh Kirby’s artwork from Reaper Man. Superb to see the Death of Rats included in the tribute.

Touching portrait of Terry Pratchett in his trademark hat. The centre piece of this epic scale work.

Discworld, is a flat disc balanced on the backs of four elephants which in turn stand on the back of a giant turtle Great A’Tuin, depicted superbly here.

Got to love Rincewind’s  Luggage, brilliant, where it all began.

Excellent depiction of the immortal Librarian. 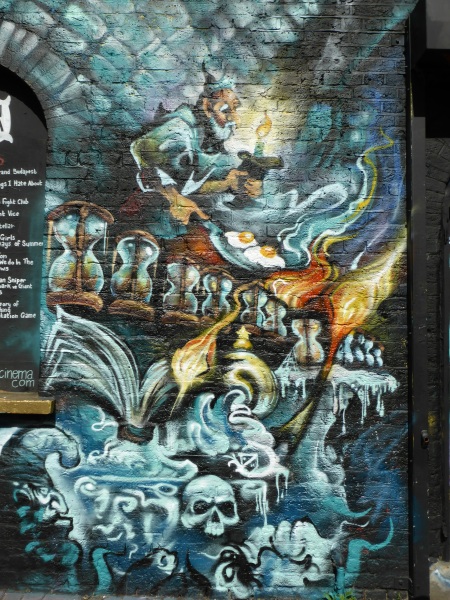 Superb depiction of Albert from the rear cover of Mort.

At this point we would like to take a section of Terry Pratchett’s novel Reaper Man which states that:

“In the Ramtop Village where they dance the real Morris Dance, for example, they believe that no-one is finally dead until the ripples they cause in the world die away – until the clock he wound up winds down, until the wine she made has finished its ferment, until the crop they planted is harvested. The span of someone’s life, they say, is only the core of their actual existence.”

AT LAST, SIR TERRY, WE MUST WALK TOGETHER.

Terry took Death’s arm and followed him through the doors and on to the black desert under the endless night.

There may never be any more new Discworld novels, but it isn’t truely ‘The End’. In all the Discworld series encompassed 44 novels and has thus far sold more than 85 million books, published in 37 languages. As long as Terry Pratchett’s works live on and continue to be read there is some comfort in the wise words “that no-one is finally dead until the ripples they cause in the world die away “, and so with these novels, and even this beautiful piece of artwork, Terry Pratchett and Josh Kirby shall live on with many many people. Incredible, just incredible work from Jim Vision and Dr Zadok.