Little over a week ago saw American Street Artist NILS in London for his participation in the ‘Underground 2016’ pop-up exhibition in Hoxton put on by Graffiti Street (covered here) and whilst over took the time to hit up two fantastic works around the East End, one solo and one collaboration with Bisser. NILS works in a variety of mediums, including painting and film, and works with a variety of techniques, such as stencil and freehand works, and in turn primarily focusing on portraiture. subjects. For his latest visit it was with a pair of freehand grey-scale portraits as his subject, that both are truly captivaing, forcing you to engage with his subjects gaze and vulnerability.

Fantastic collaboration from Bisser & NILS presenting a pair of grey-scale portraits, highlighter with red, in such a diverse pair of styles that sit so well in this somewhat surreal scene set amid this lovely framing railway arch in Hoxton. 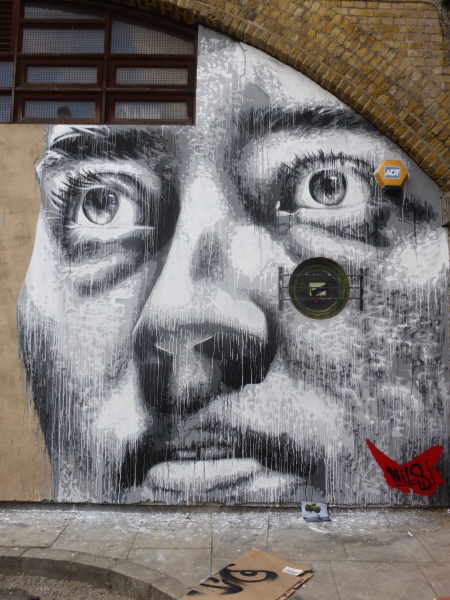 Love the fluid and loose style of this absorbing piece.