Well it seems like it has taken forever for this work to be completed, with the piece being constructed in various bursts over a month or so, with the artists coming back and forth to add to the work and build up the sense of cohesion which was finally attained. However despite the lengthy wait we have to say it was every bit entirely worth the wait to get to view this incredible seven artist collaborative work. This work which was put up with support from Matthews Yard, Croydon, is the result of Morgandy setting to get a group of artists together to fill these walls with a piece which flows around all four sides of this shed in Matthews Yard and features contributions from some seven artists comprising: Morgandy, Eska, Itaewon, Kapese, Van Dali, Carlos Cashiero and Autone.

Firstly this work is just absorbing, but it is also very well thought out with an artist taking a section to work their own way and then overlaid with contributions across the sections by the contributing artists, making at a real all encompassing collaboration. This piece has so much flow, depth and energy really leaving you at a loss as for where to focus your gaze.

The artists fuse together fantastically on this work with the level of energy in Autone’s gridlines permeating into Itaewon’s futuristic structures, which in turn are met by Morgandy’s vibrant and colourful organic shapes, before melting into Eska’s little 3D world full of light and positive energy, with Kapese on this end offering a snapshot into the world before it, before finally flowing into the cityscape work of Van Dali and character work from Carlos Cashiero on the reverse wall.

There really is just so much going on this work, reflecting the time and effort the artists put into this production, each of the artists worked to their own distinct style but the loose theme on the work is a sense of organic natural and spiritual freedom giving way to the city, from one dynamic to the next, the structures which delineate the experience of life. We do love a collaboration here, something which for us is one of the most impressive things with Street Art, something you don’t see in most other art forms as extensively or with such freedom. This work represents one of the finest collaborations we have seen at London Calling Blog, the attention to detail is immaculate and the level of energy, movement and depth within this work is just so striking.

We have plenty of progress pictures as it was such a pleasure to witness this work coming together over our trips to Croydon and we also have plenty of shots of the finished work as there really are so many ways to view this work and so much to explore within the full piece.

Initial outlines down from Kapese. 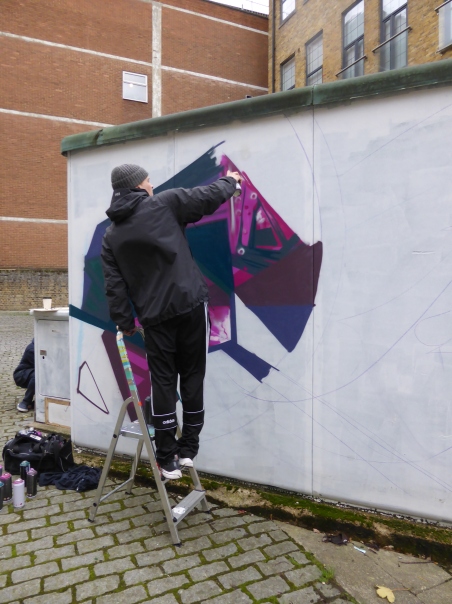 Itaewon starting of his main section of the work.

Initial sketch down from Eska.

The many array of colours that Morgandy would use on this work. 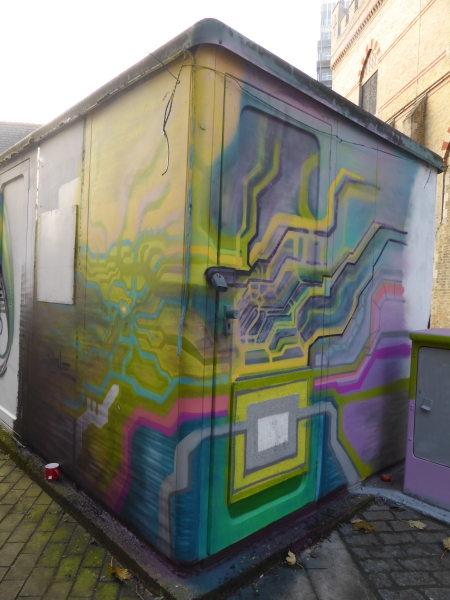 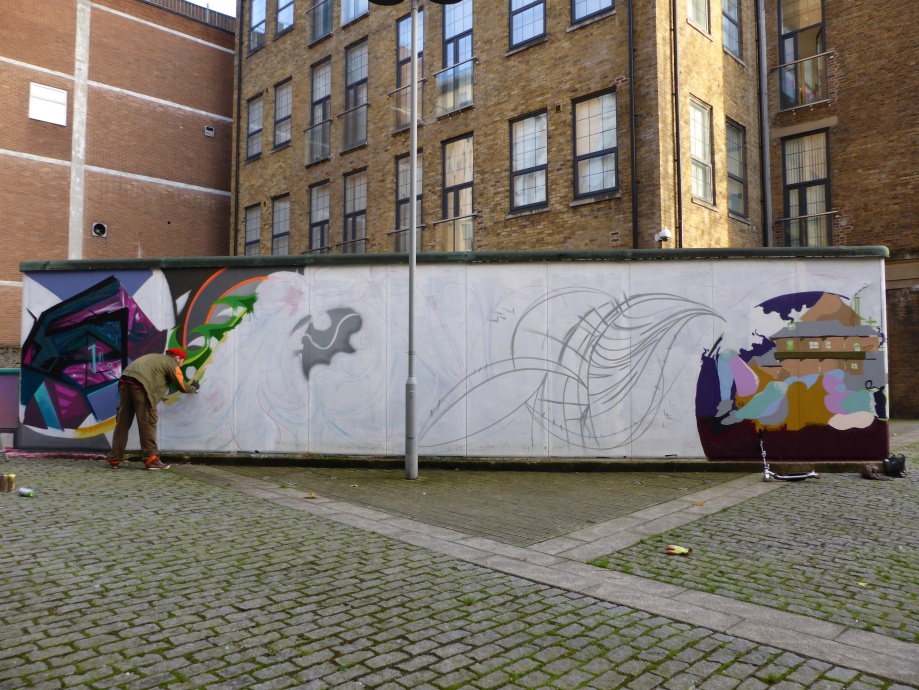 Morgandy starting to add the first of what would be many colours. 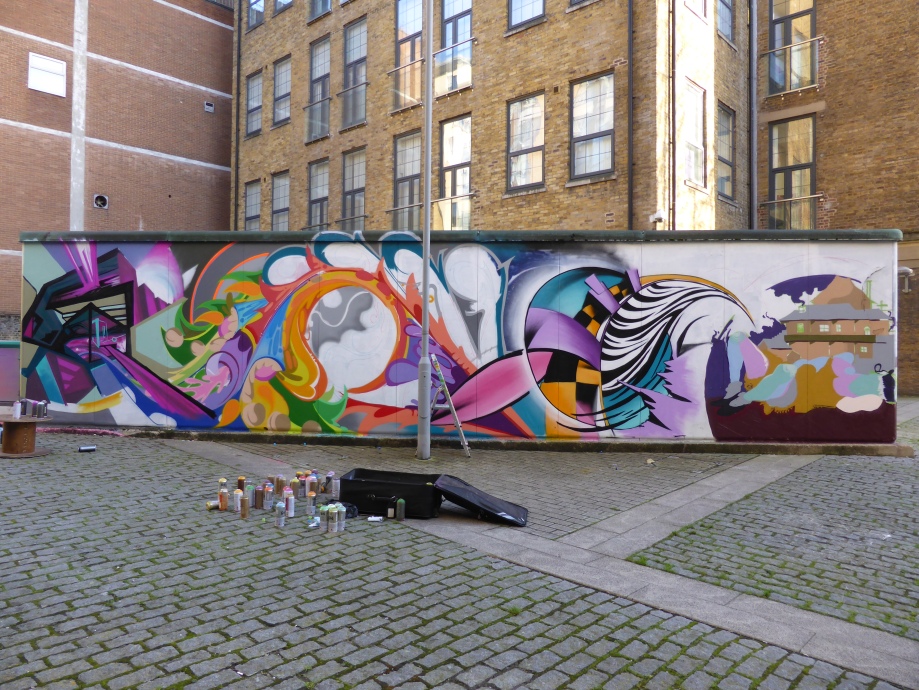 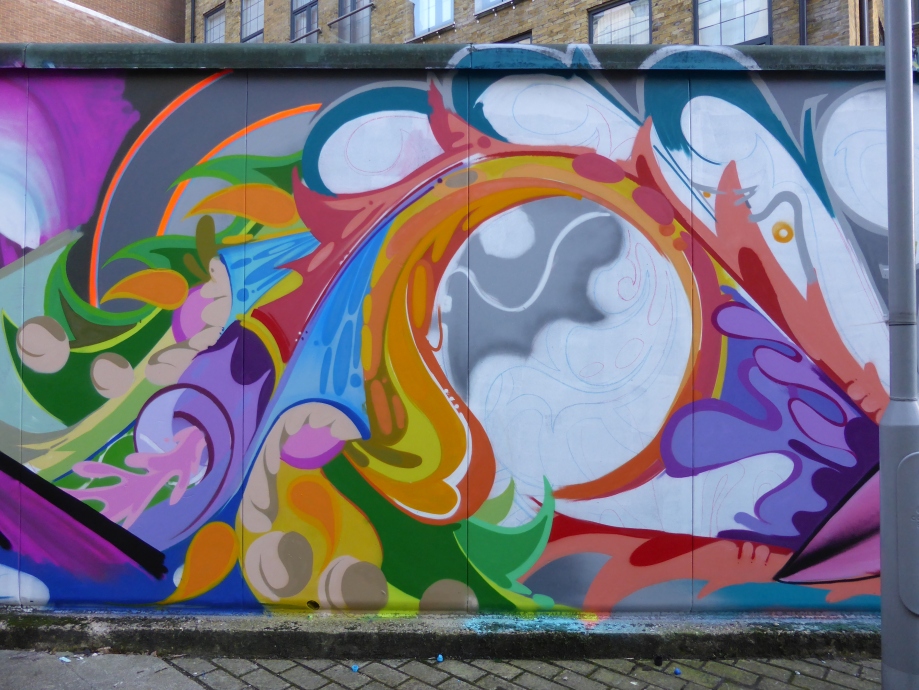 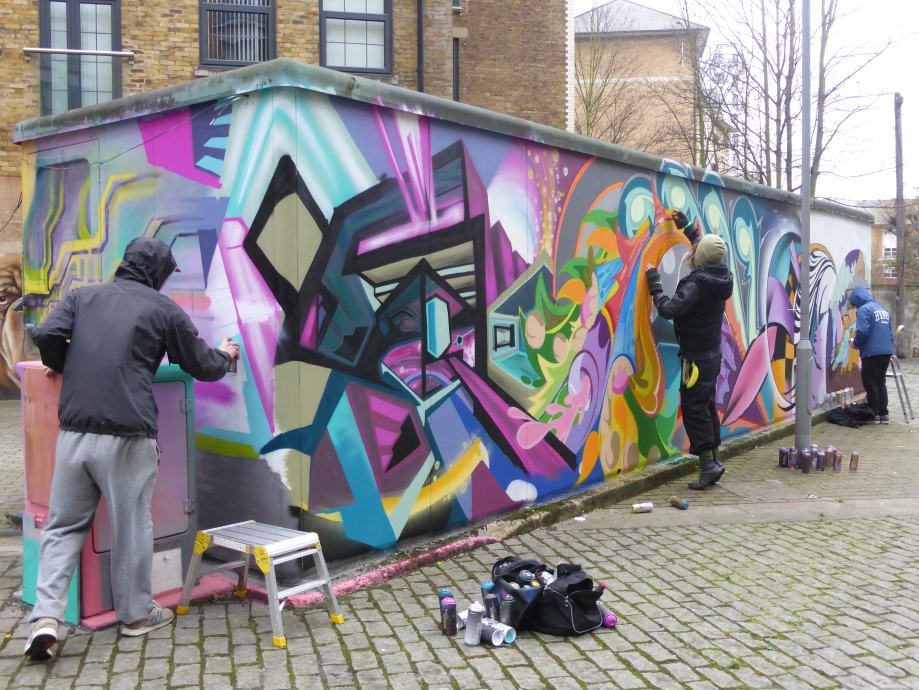 One side of the stunning finished collaboration. 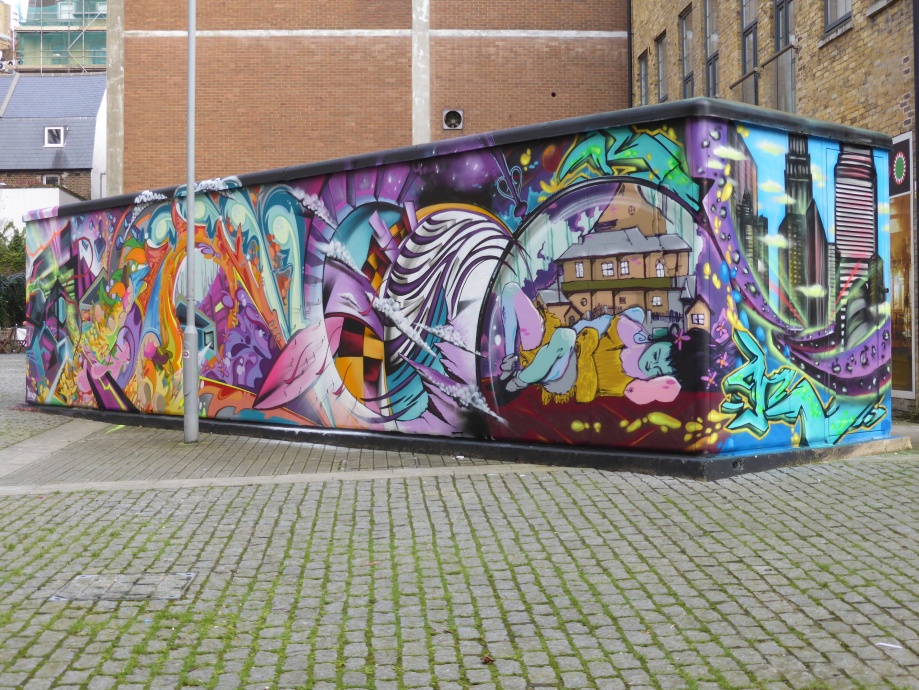 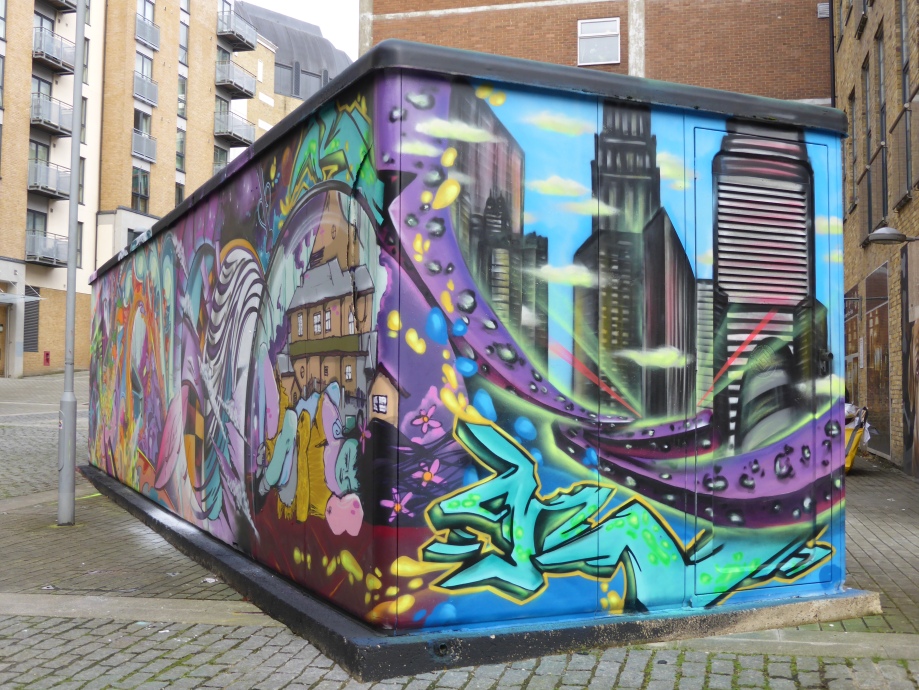 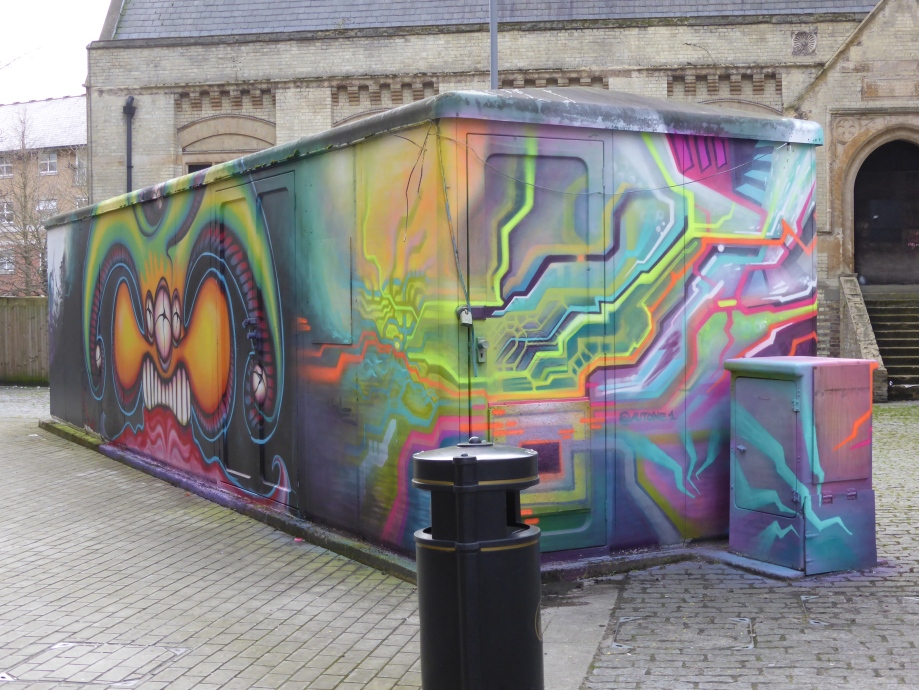 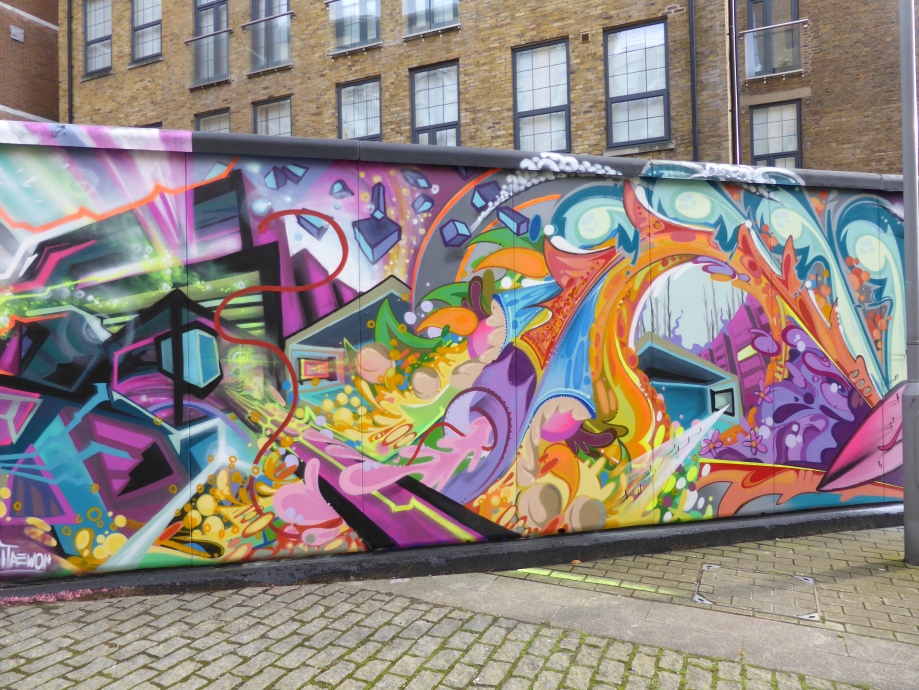 Work by Morgandy, Eska, Itaewon, Kapese & Van Dali. We love how the end section by Kapese has been overlaid with a magnifying glass, offering a close up glimpse at the world portrayed in Eska’s adjacent world, suggesting a glimpse of what one of Eska’s tiny characters may be like. 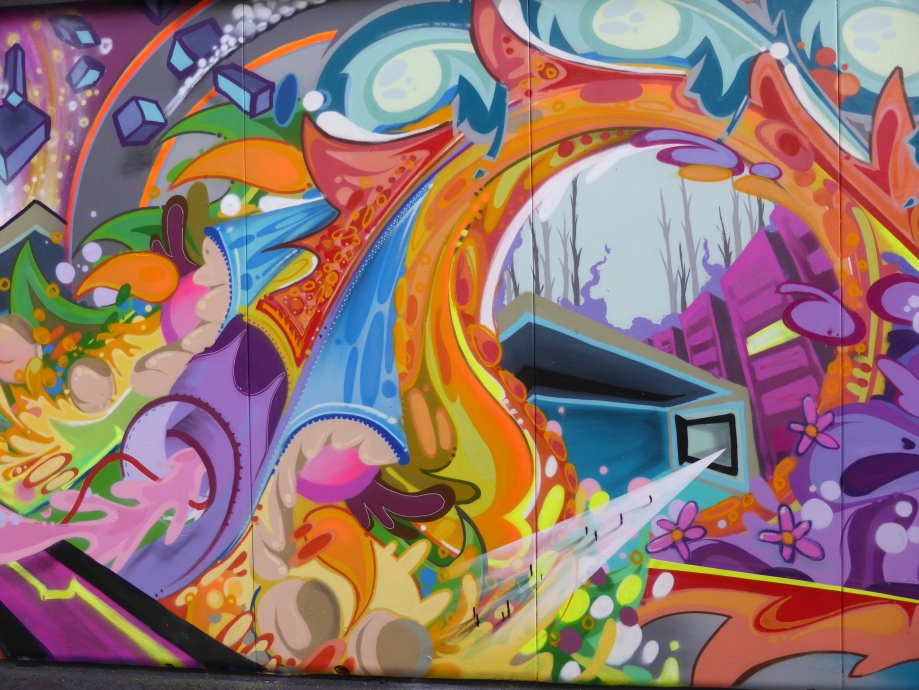 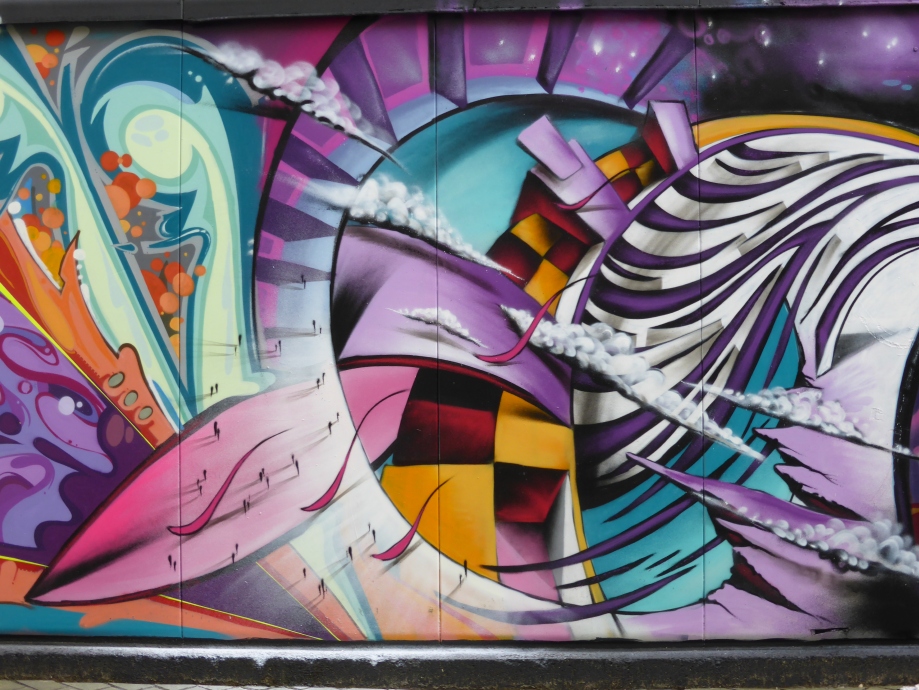 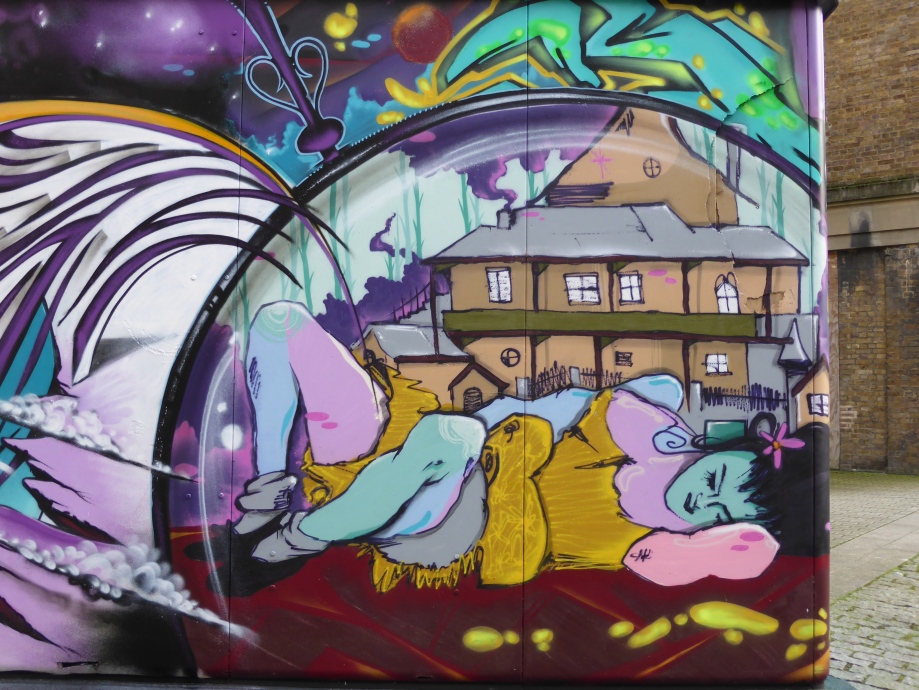 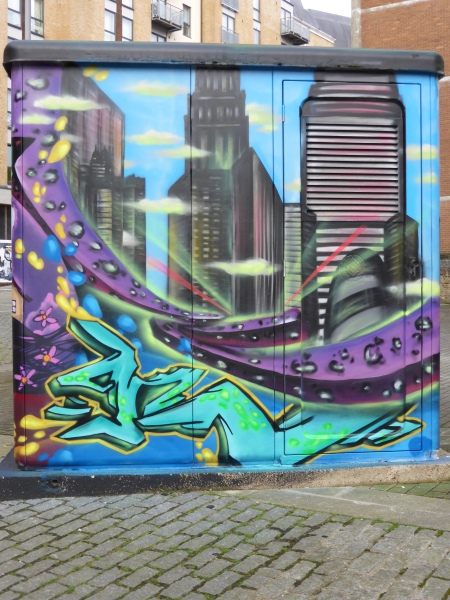 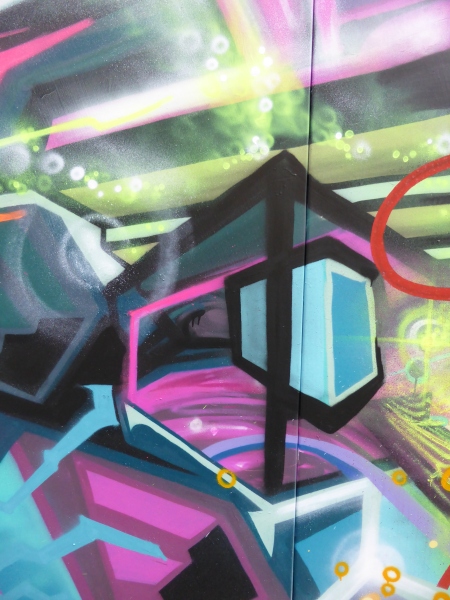 Detail of work by Itaewon.

Detail of work by Morgandy.

This is our favourite part of the entire work, with Morgandy’s swirls framing the landscape by Kapese and structures by Itaewon and Eska’s tiny figures traveling towards the light. This small section really highlights the well thought-out collaborative dynamic throughout this superb work.

Detail of work by Eska.

Detail of work by Kapese.

Detail of work by Van Dali. 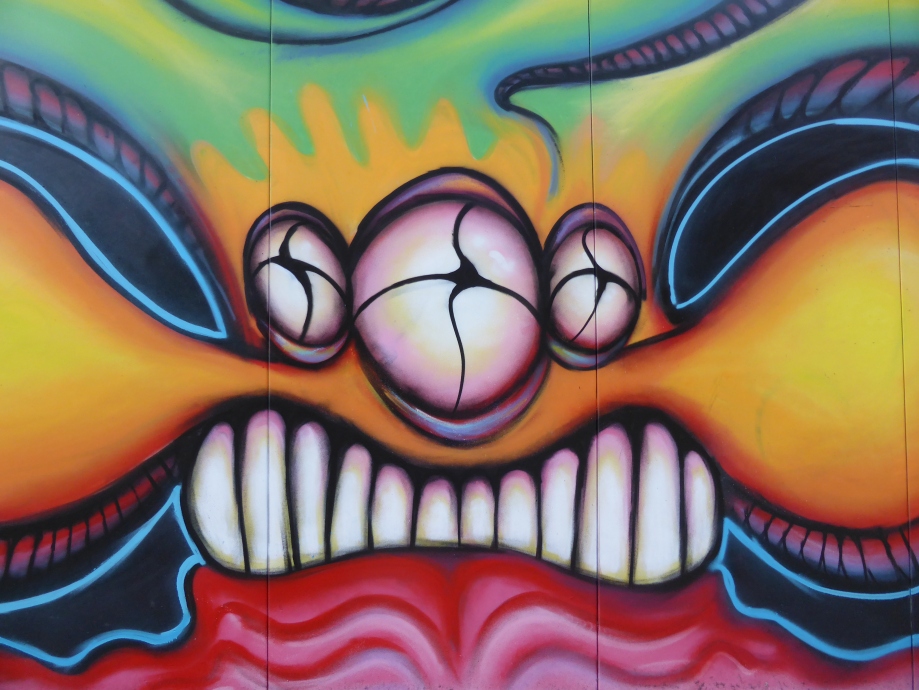 Detail of work by Carlos Cashiero.

Detail of work by Autone.

A stunning and mesmerizing addition to this little square.