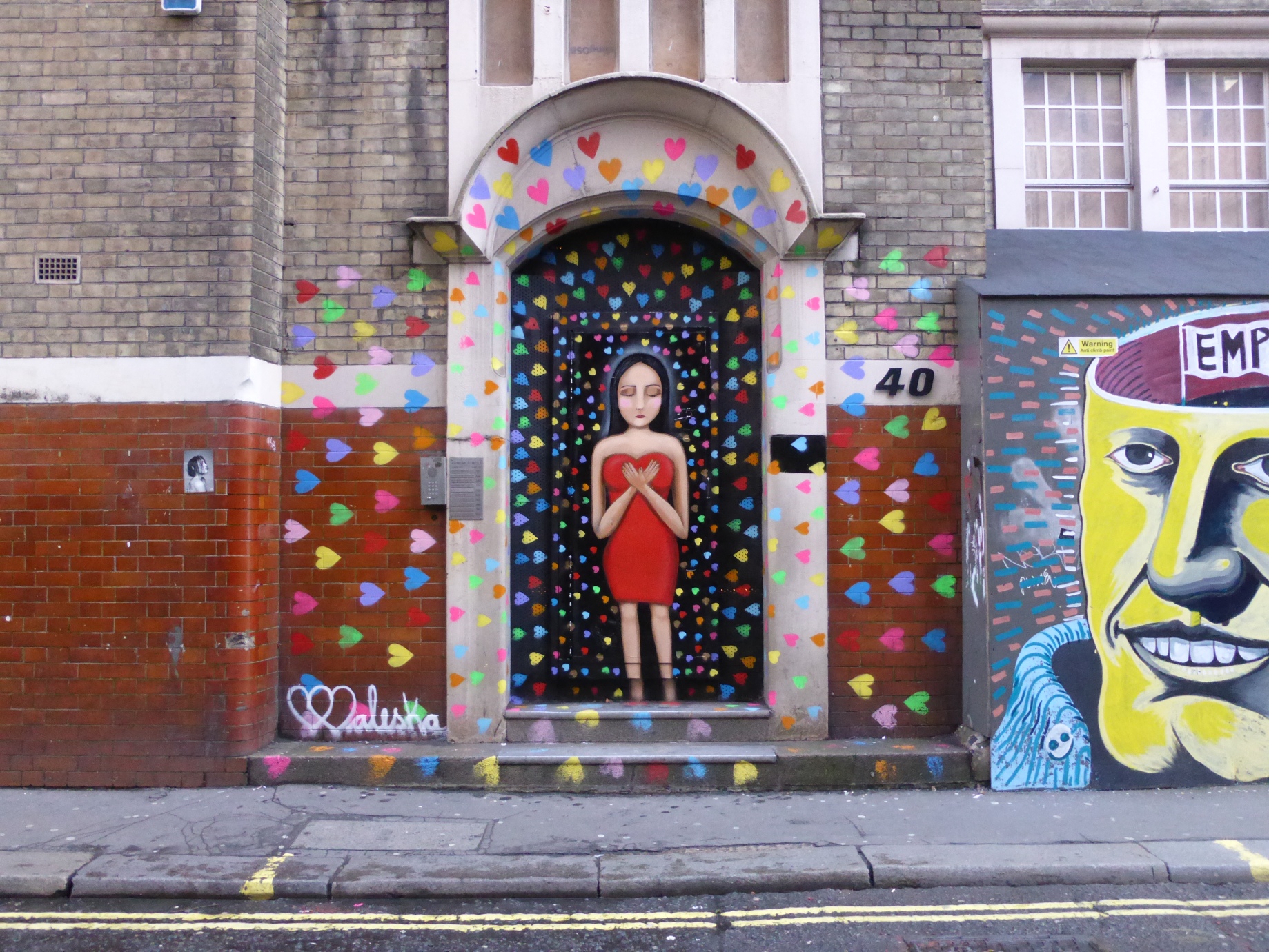 Earlier this week we made it to the final day of the Braziliarty Pop Up exhibition in Soho. A show put on by Braziliarty, and in part with Pigment, who together organized the first LATA Festival in London last summer (covered here), which will be returning to London this year. Braziliarty is a social enterprise CIC, who set to promote Brazilian culture and art through the production of events and here in Soho they put on a impressive event showcasing a range of artistic styles and mediums.

The venue of this exhibition, 40 Beak Street, is quite interesting in its own right. Built in 1910 as a Police section station, then becoming offices, before in 2008 it was marked for future demolition, in turn becoming a squat and in 2013 the building was occupied Anti-G8 protesters. So it is great that this soon to be demolished building has also had one more brief incarnation as an art space and that this in turn has led to such a nice building in the heart of Soho receiving three pieces of Street Art, in an area that until recently was devoid of any murals or paintings. The three paintings at 40 Beak Street really do brighten up this little corner of London, especially the beautiful work from Waleska Nomura, that is just full of positive energy and sits so well against the surreal works to its side.

The exhibition inside was also worth the visit, showcasing a range of mediums from paintings and drawings, to full on installation works. In addition to this, over the course of the exhibition, artist Flavio Graff presented a live performance of his work ‘Five Years’, performance artist Marcia Mar presented her work ‘Mirroring Peace’ as well as offering Yoga classes downstairs, setting to showcase varying aspects of Brazilian culture beyond Street Art. So first we have the Street Art followed by the exhibition pieces below, all from what was a great well-rounded event.

Detail of work by Waleska Nomura. 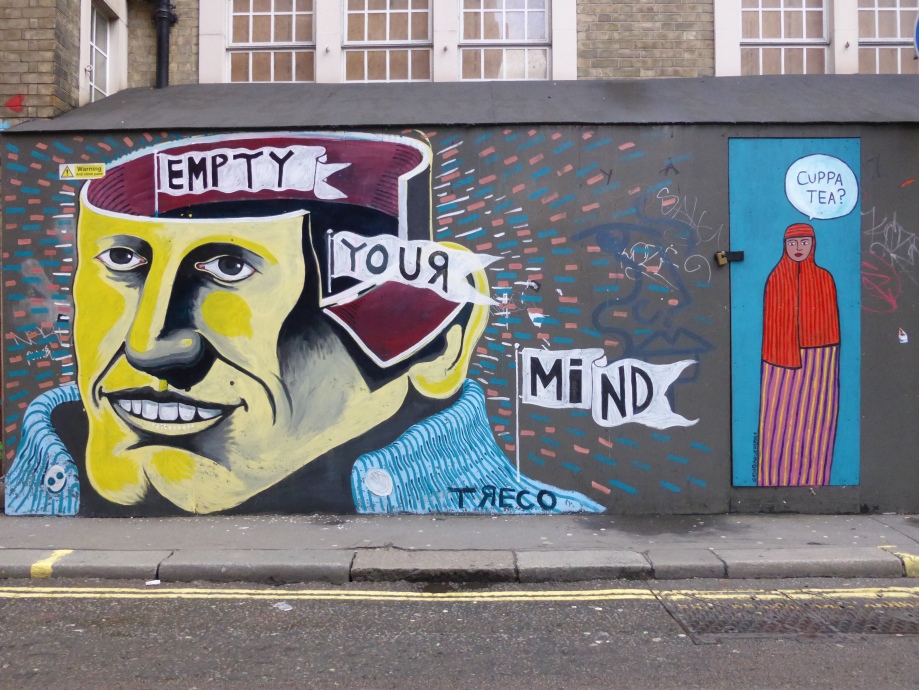 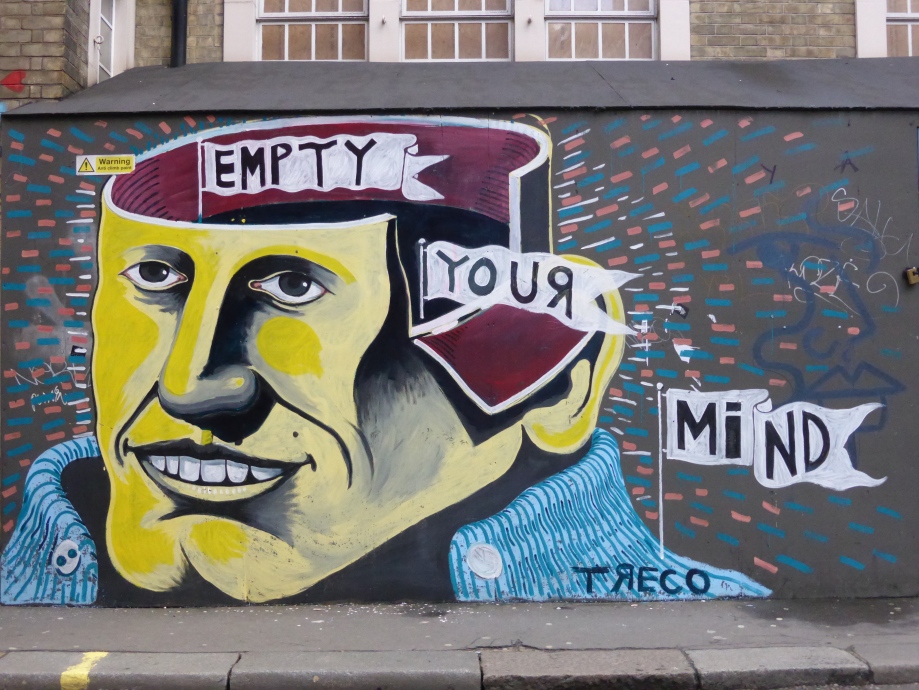 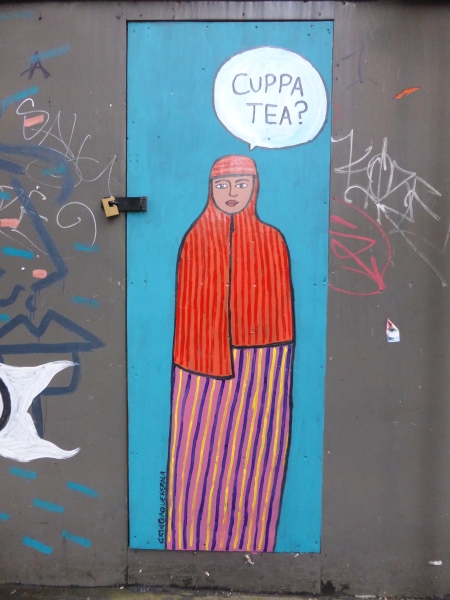 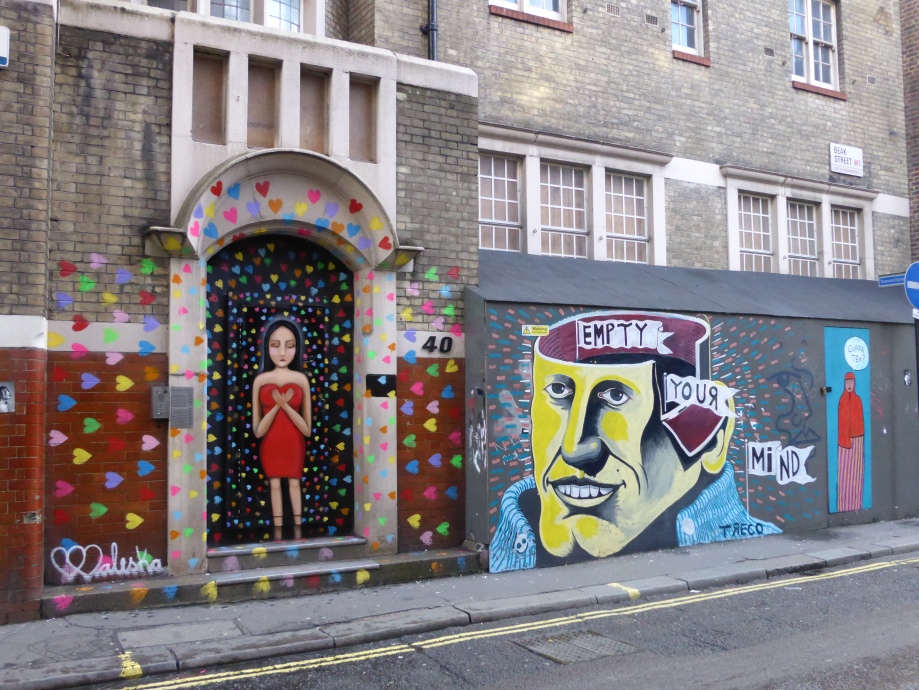 Onesto is a diverse artist, working as a sculptor, painter and using varying multimedia mediums. His distinctive and instantaneously recognizable characters attempt to “discuss the relationship between cities and their inhabitants“, infusing his work with subjects that are drawn from common moments of everyday life. 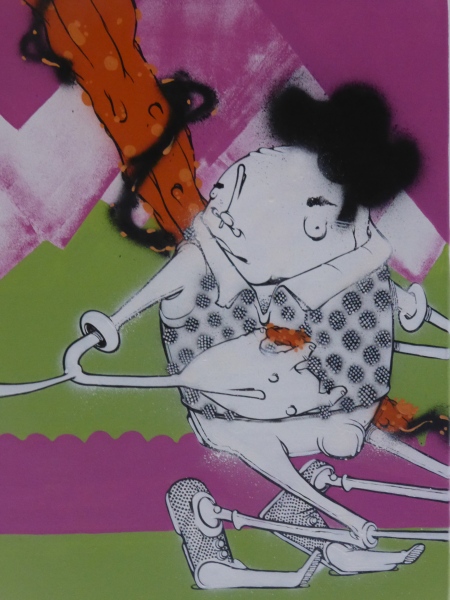 Alex Senna through his work sets to create vivid expressions of human relationships in  a romantic intimate context set to his minimalist black and white colour palette. His works conjure up a sense of belonging often combined with a feeling of nostalgia. 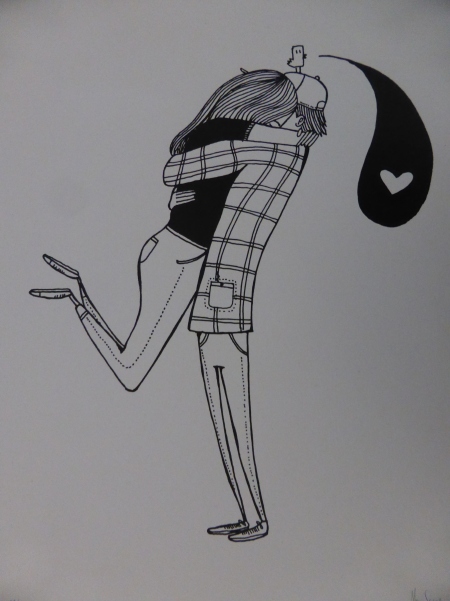 Waleska Nomura is an entirely self-taught artist, who started her career as a Graffiti Writer on the streets of Sao Paulo, moving onto canvas and developing her own brand of warm and soulful characters taking her work in a more figurative direction on the streets. Her work is currently driven by her message of “Spreading the Love and Positive Energy to the World”. 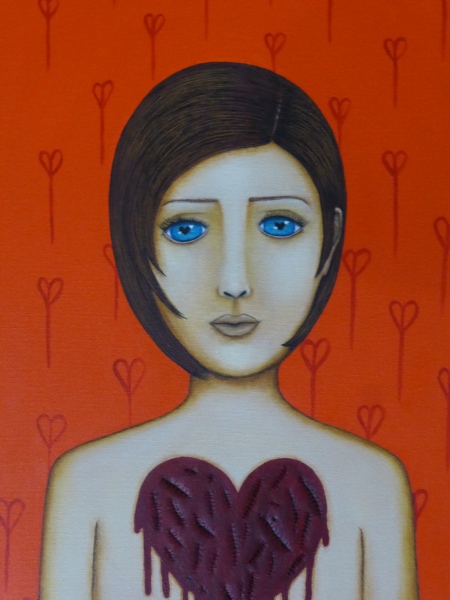 Digi Cardoso who started working with illustration and painting in the street from an early age, creates a range of delightful warm characters inspired by the mundane and everyday life of the urban environment. His works were the highlight of this exhibition for us here at London Calling Blog. 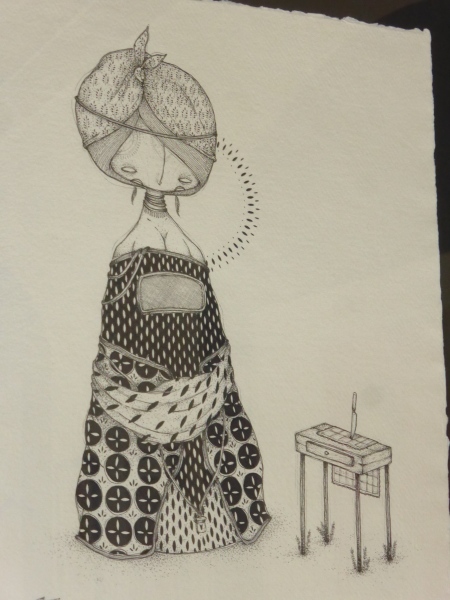 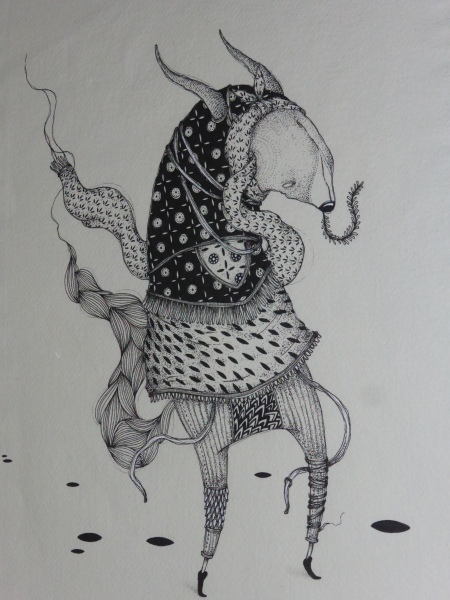 Thiago ‘Goms’, strongly influenced by Street Art from an early age, took up painting in the streets as a teenager. His anthropomorphic characters fuse into hybrid creations, with animals, typically cats, taking on a human personality, often tinged with a sense of sadness or loss. 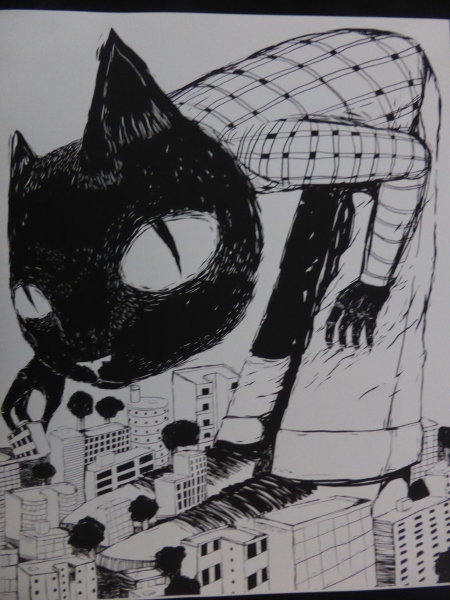 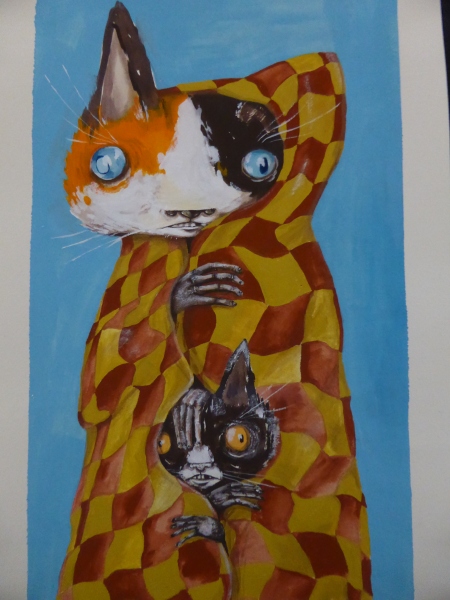 Ananda Nahu has been painting since 2005 and typically creates portraiture of black women accompanied by music symbols, using the bright colours of her native Brazil, blended with intricate stencils designs applied to a range of mediums, including, paper, canvas and fabrics. 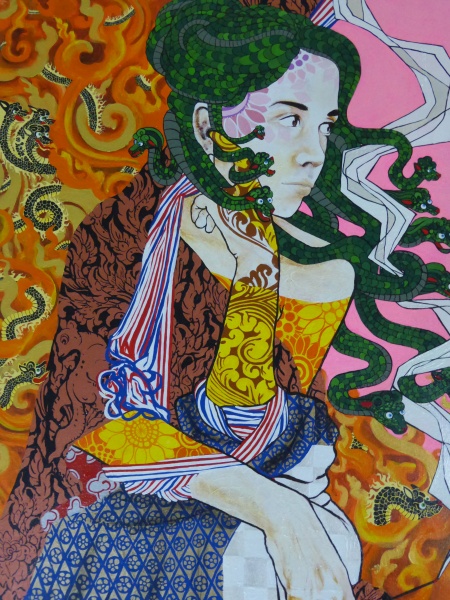 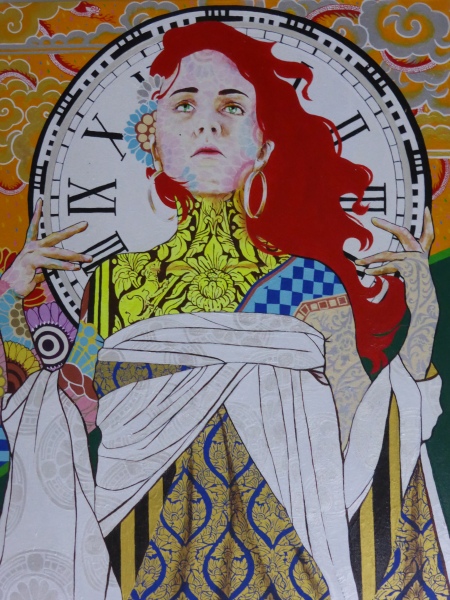 Yara Tupynamba works in a range of artistic mediums including: fine painting, engraving and murals and was one of the first female artists to paint murals in Brazil. The work below is part of the ‘Ecological Reserves of Mines Gerais’ exhibit which showcased a series of works set to show images of indigenous fauna and flora from the Doce river valley, which suffered an eco disaster in November 2015 when a damn, used in the mining industry collapsed, polluting the river with toxic mud.

Flavio Graff an artist who works in a range of mediums, setting to create interactive performances by combining elements of installation pieces, music and dramaturgy. This work was inspired by David Bowie’s 1972 song ‘Five Years’, presenting a collapsing and decaying world, contrasted through the mixture of organic materials amid the architectural  structures. 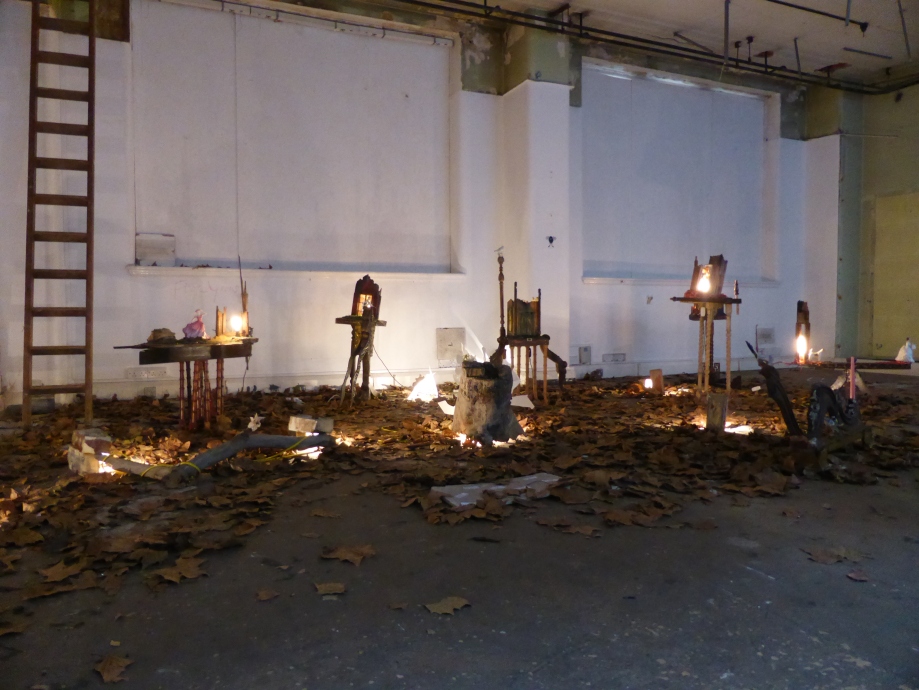