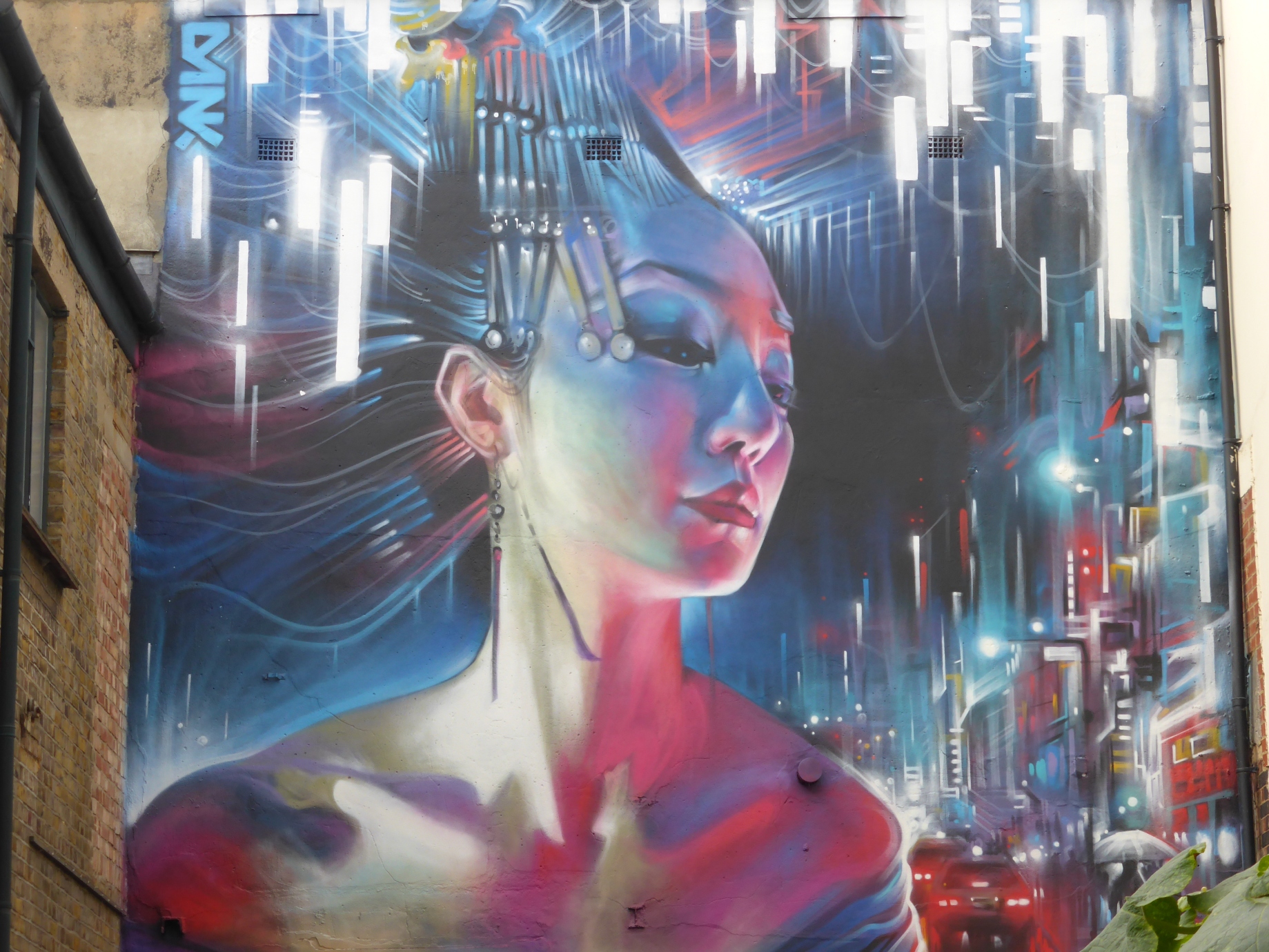 Last weekend we here at London Calling Blog were fortunate enough to be invited by Dan Kitchener to document his latest London creation on the premises of the 5th Base Gallery in Heneage Street, just off of Brick Lane. What a treat indeed, any long term followers of our blog will know that Dan Kitchener is one of our absolute favourite artists in the UK and the world over, so you can appreciate how much we enjoyed seeing his latest work come to life.

The mural is some 30ft x 20ft and was completed with the aid of a scissor lift, making for Dan Kitchener’s largest Geisha based work currently in London, with two huge ‘Liquid Lights’ cityscape works also to be seen currently in Clerkenwell and Brockley. Creating a piece that Dank had been waiting for just the right wall on which to construct this beautiful work, which is a continuation of his huge wall completed for Upfest in Bristol back in July (covered here). The piece is entitled ‘The Queen Of Neon’ in which the Geisha character, of which the image is based on photographs taken by Dank of model Ayumi LaNoire, represents the spirit of Tokyo, epitomized by the cables and neon signs entwined in her hair, becoming very much part of her construction and being. She stands proud at the centre of the city around her, the very essence of her surroundings.

It is always a pleasure for us to catch Dan Kitchener at work, we have been fortunate enough to catch him at work on several pieces this year, but not previously on such a detailed piece of one of his Geisha based works. Meticulous in his work he built up the piece applying the spray paint in a series of direct solid bursts as well as adding the many colours in a more loose, fluid and energetic manor that culminates in what you will see below.

All in all an absolutely stunning piece, just magnificent, not just because of the vast scale of it, or because of the seemingly short time in which took Dan Kitchener to paint it, somewhere in the region of just 15 hours, but simply because it is beautiful. This is now one of the largest murals around Brick Lane, the heart of Street Art in London and certainly one of the very best works currently in town. Having asked Dan to paint the wall on their premises, the 5th Base Gallery intend to keep the wall as is for way in to the foreseeable future, which is only fair considering, and great news for fans of Street Art who will be able to view this piece for many months ahead. 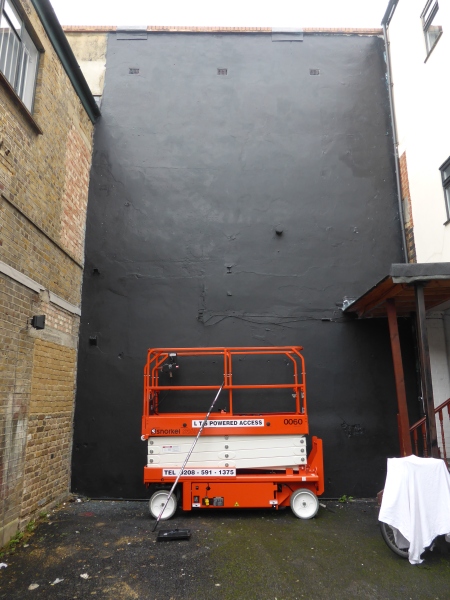 The buffed wall, ready for action.

Initial outlines from Dank on Day 1. 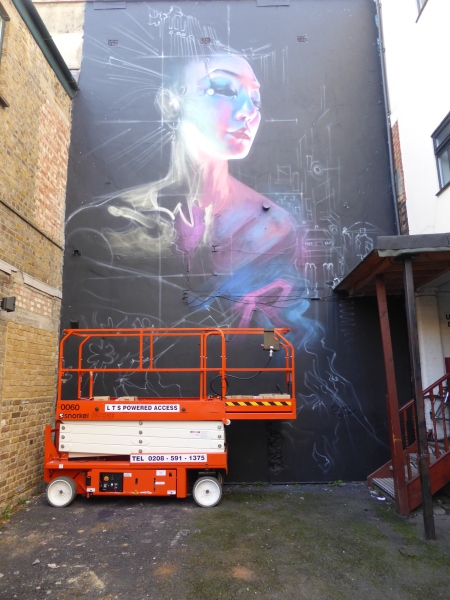 We had to disappear for a few things on the first day of this work, and this image is 3 hours on from the last shot, with the initial and all important sketch down and the layering process commencing. 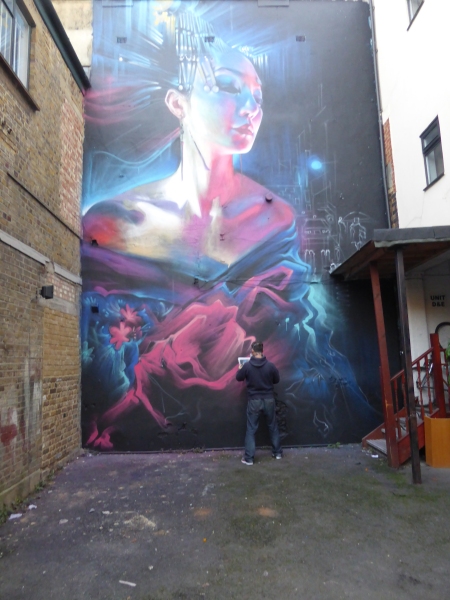 This state of progress marks some 2 hours on from the last shot and it is just incredible to see the rate at which Dank starts to apply the colours once he is underway. 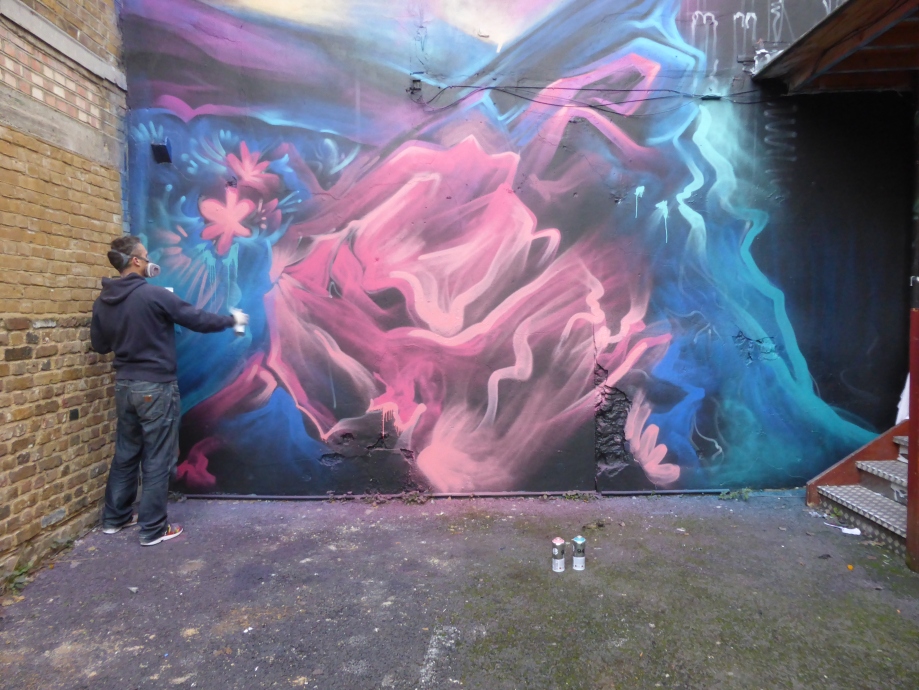 Work-in-progress at the end of Day 1. It really is impressive that this was all achieved from a blank wall in just 8 hours. 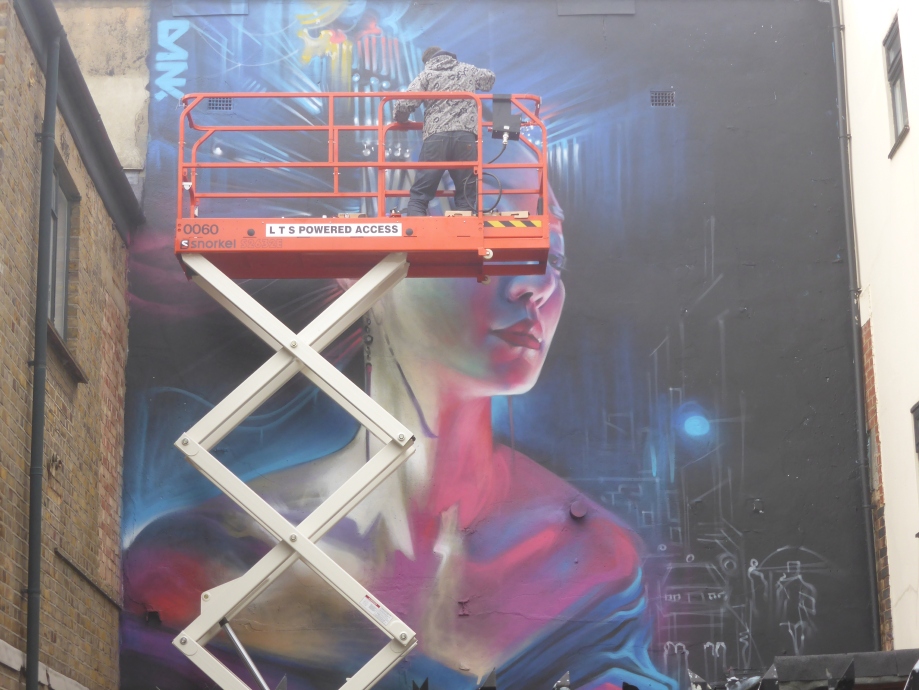 Dan Kitchener at work early on during Day 2. 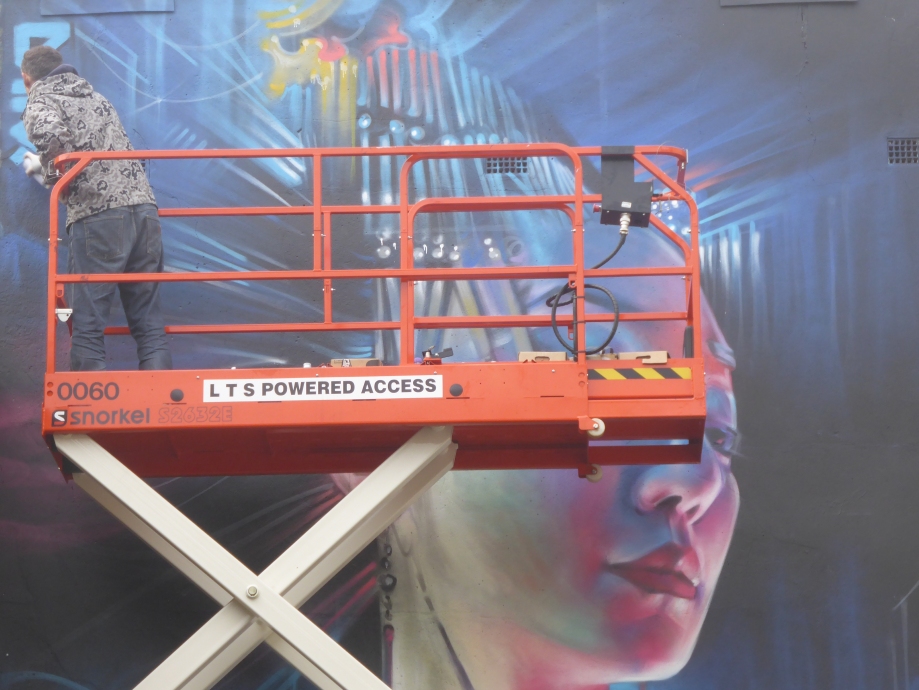 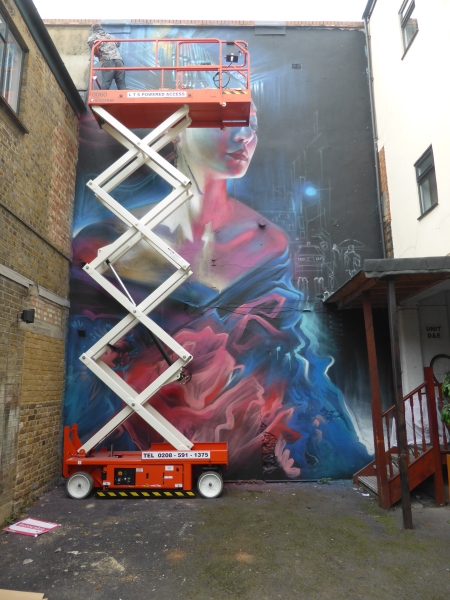 Showing the scale of the wall on which Dank created this mural.

Dank adding the hanging neon lights to the top of the wall by roller, which really create a sense of depth in the piece which compliments the cityscape on the right of the image. 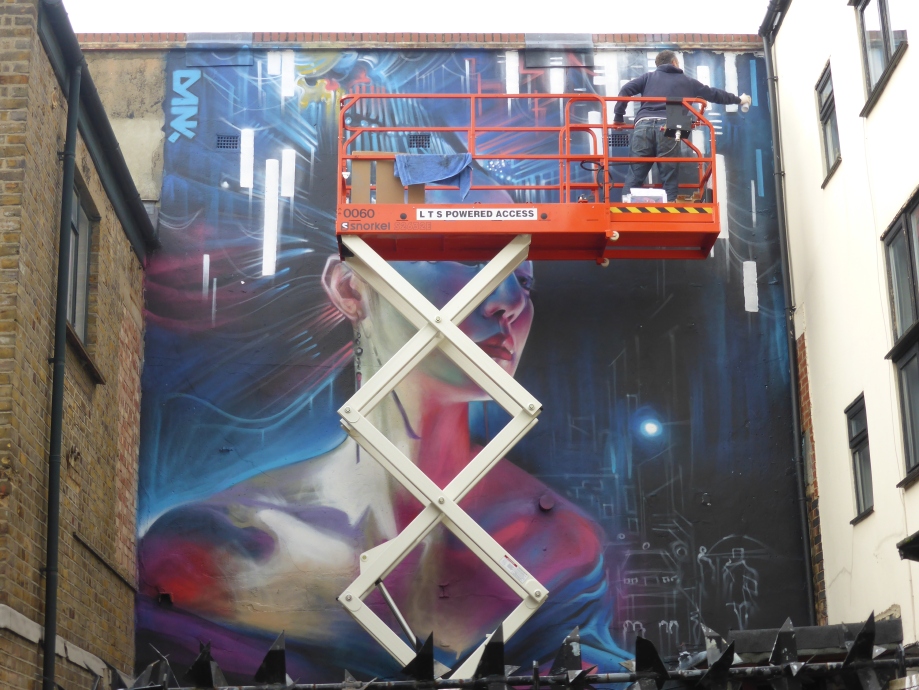 Dank at work at the top of this 30ft wall. 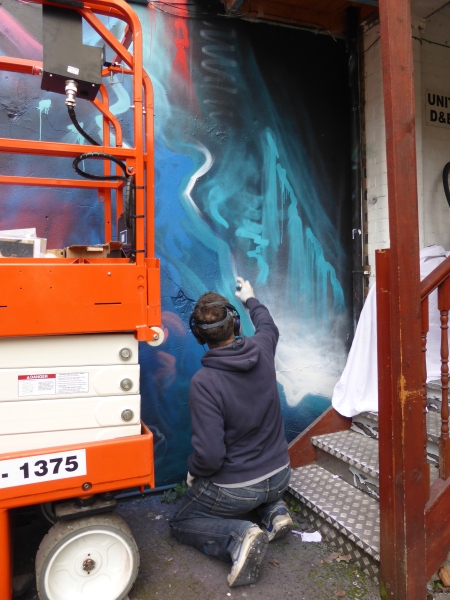 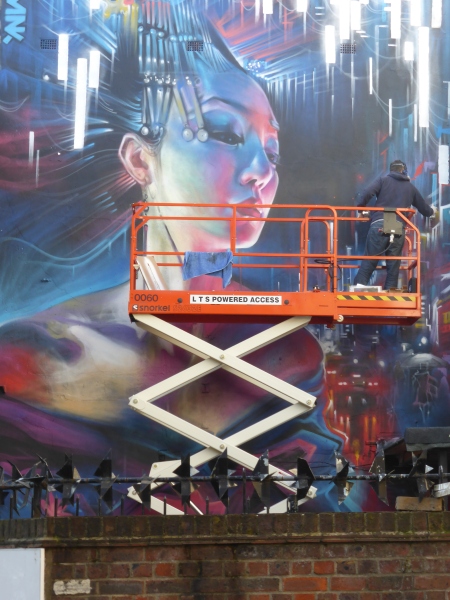 Dank at work way up high. 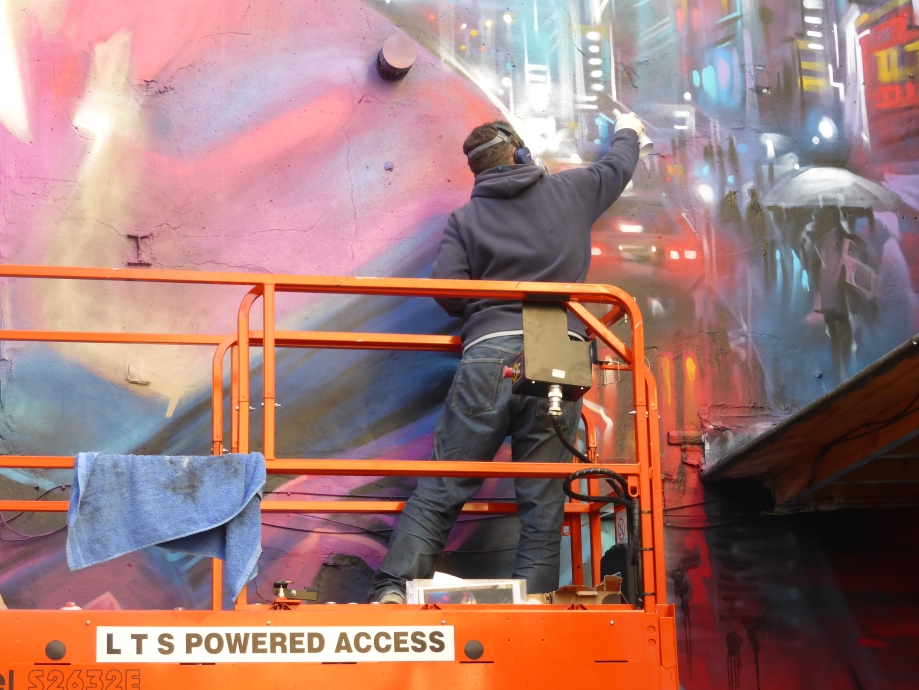 Dank creating the ‘Liquid Lights’ cityscape that flows so perfectly alongside and behind the Geisha. 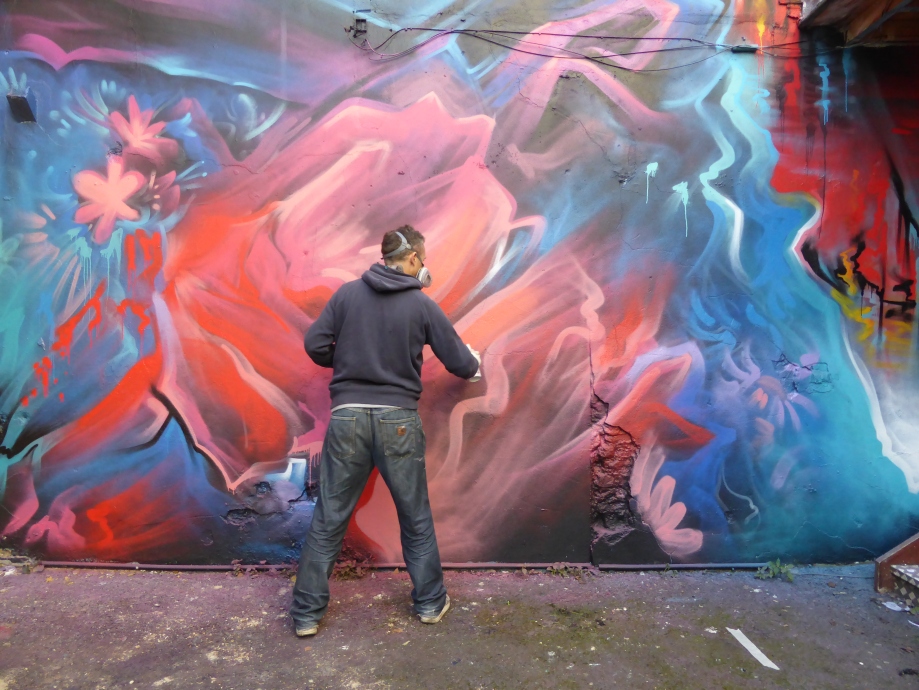 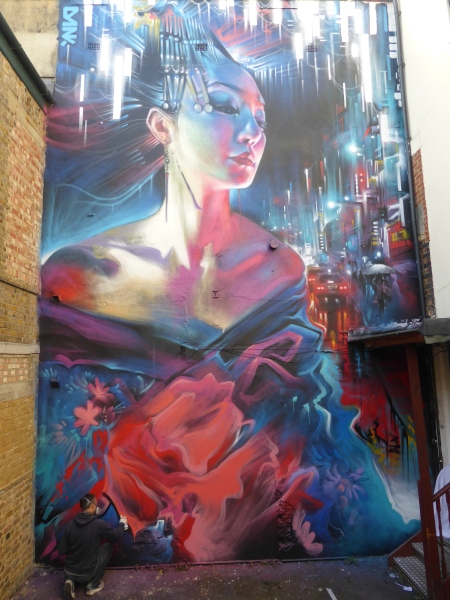 This shot of the near-completed piece really offers a sense of how big the mural Dank created actually is.

Scissor lift and tools for the task. 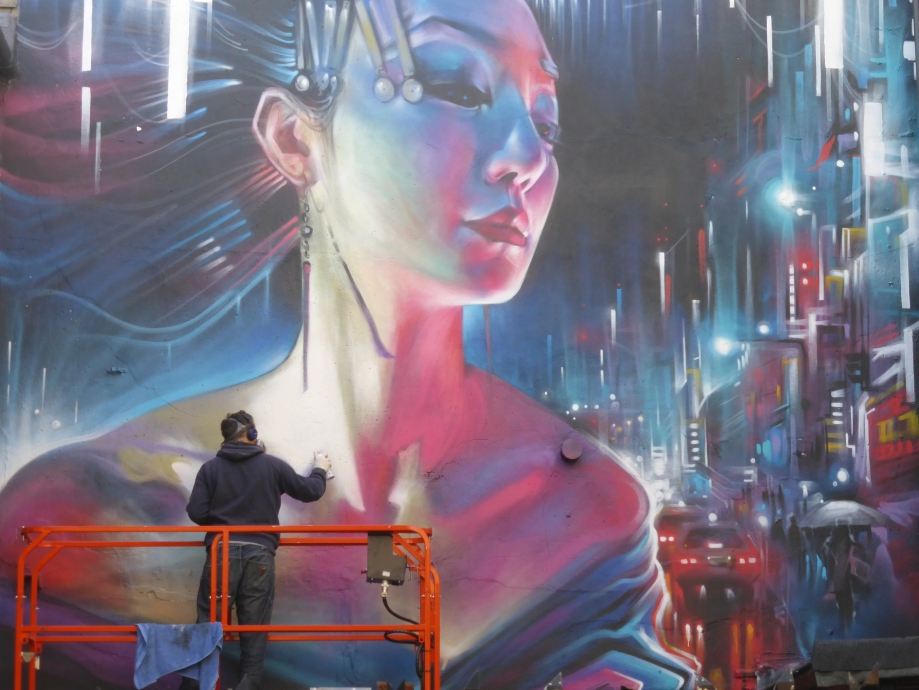 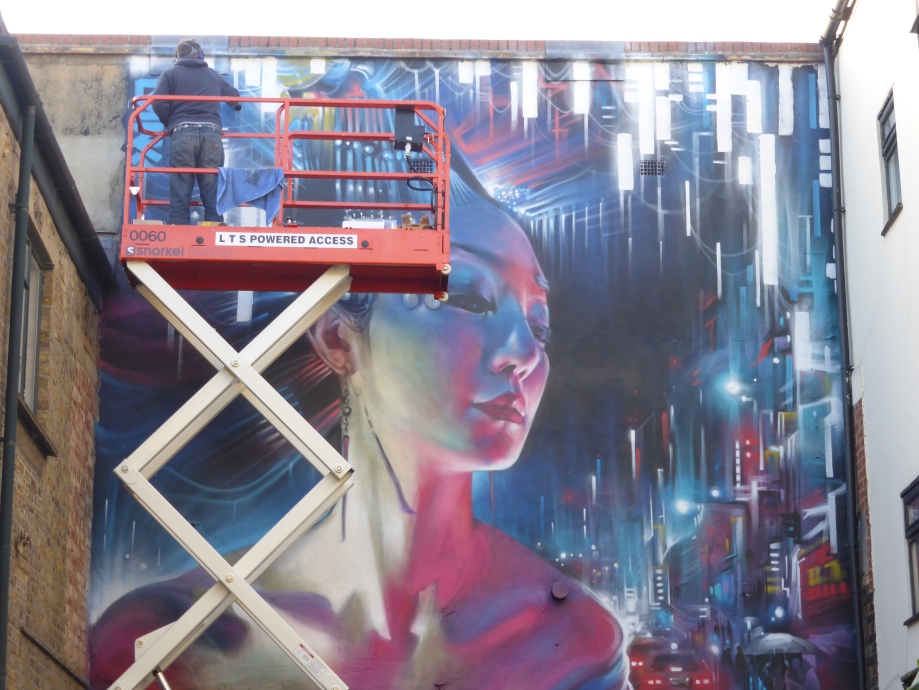 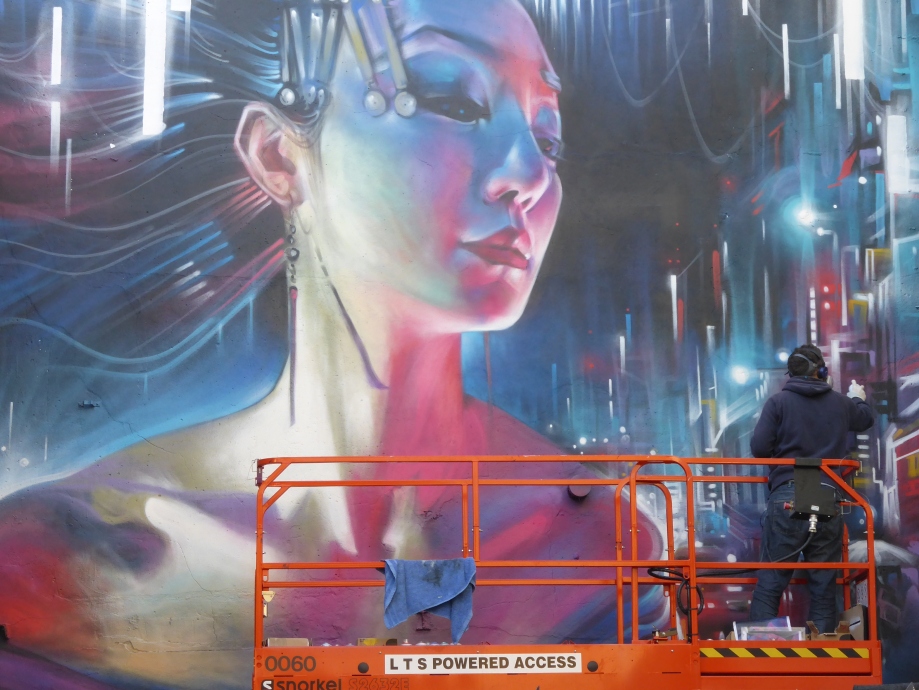 Our favourite progress shot of the work, with Dank’s Geisha giving the him a look of appearing disinterest, she is the essence of a major city and doesn’t have time for such trivial matters as someone painting.

Adding some of the very final touches to this triumphant work on Day 2.

The stunning finished work, unfortunately as the light was dropping by this point our finished shots taken from aloft the scissor lift don’t do the colours in this work justice. 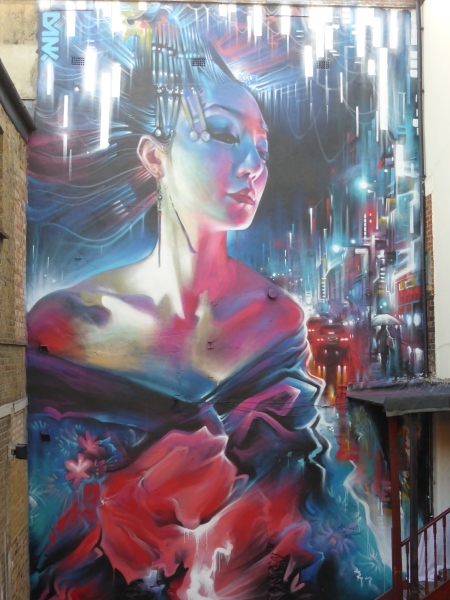 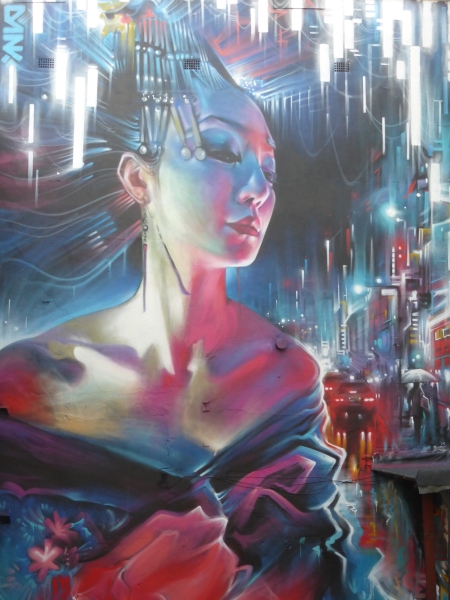 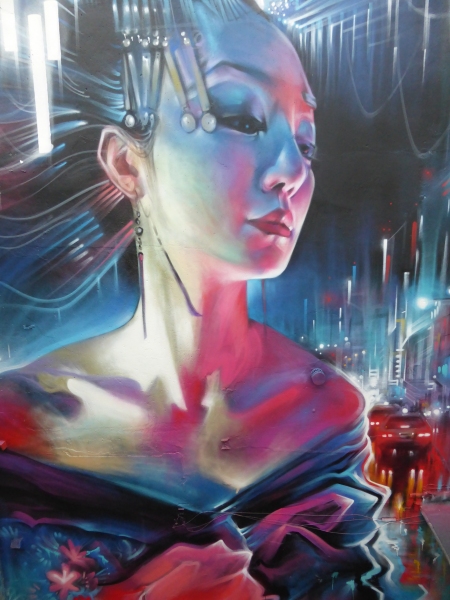 The textured and layered blends of colour to create the tones on the face are perfect and really bring the subject to life.

We love the hints of blue and red respectively reflected in each of the eyes as the subject gazes into Tokyo. 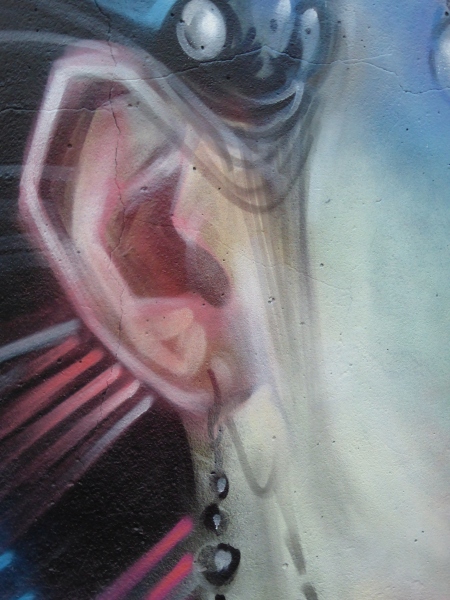 Close-up of our favourite element of the photo, the shadows of the earring, a real subtle touch that defines the attention to detail put into this incredible work. 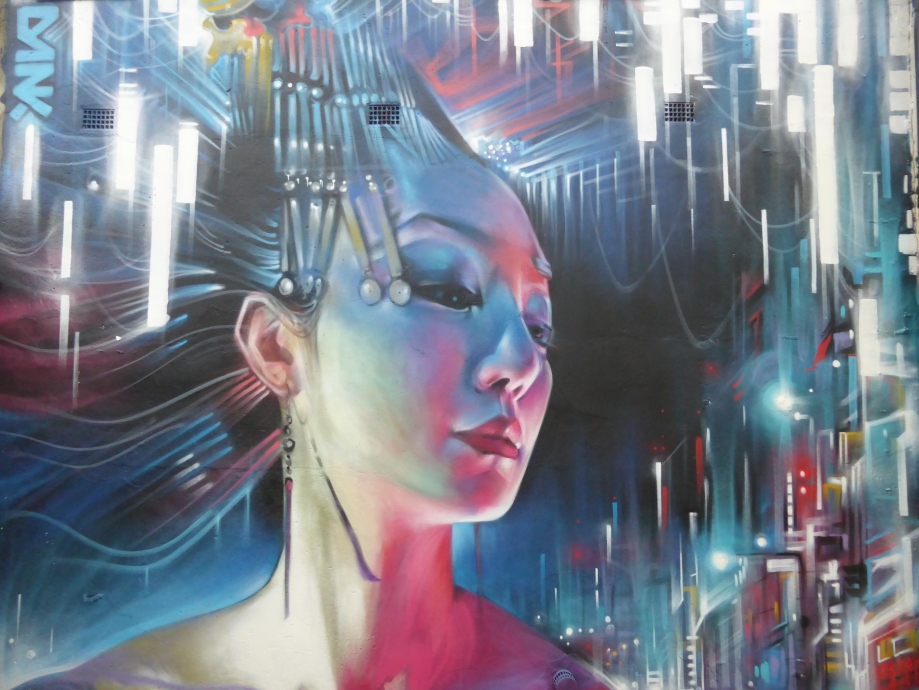 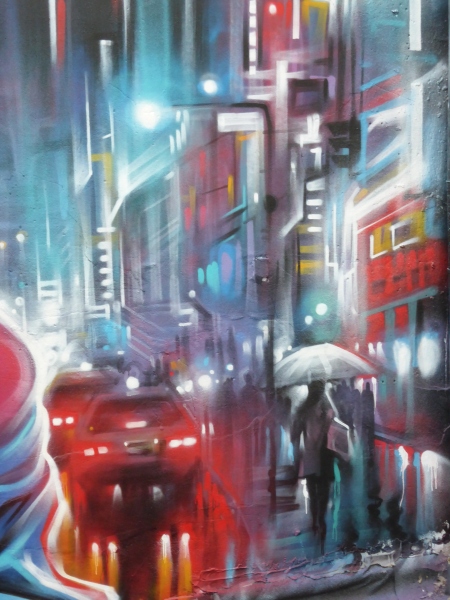 Detail of Dank’s cityscape to the right of the geisha, of which the perspective really sets to create a sense of depth in the work, with the Geisha really popping out of the wall as the city continues business as usual around her.

As viewed from ground level, unfortunately from here the colours higher up in the piece aren’t captured as well as the work appears in person.

As viewed from outside the 5th Base Gallery, offering a great view even if you find yourself unable to get in for pictures. 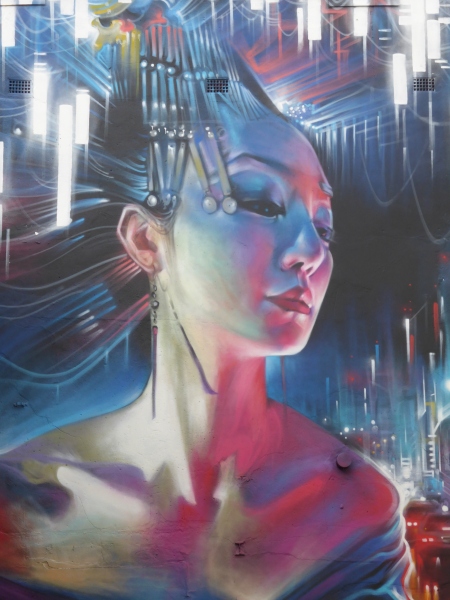 The effect of light and shadow around the her neck and shoulders is exemplary, especially along the collarbone. 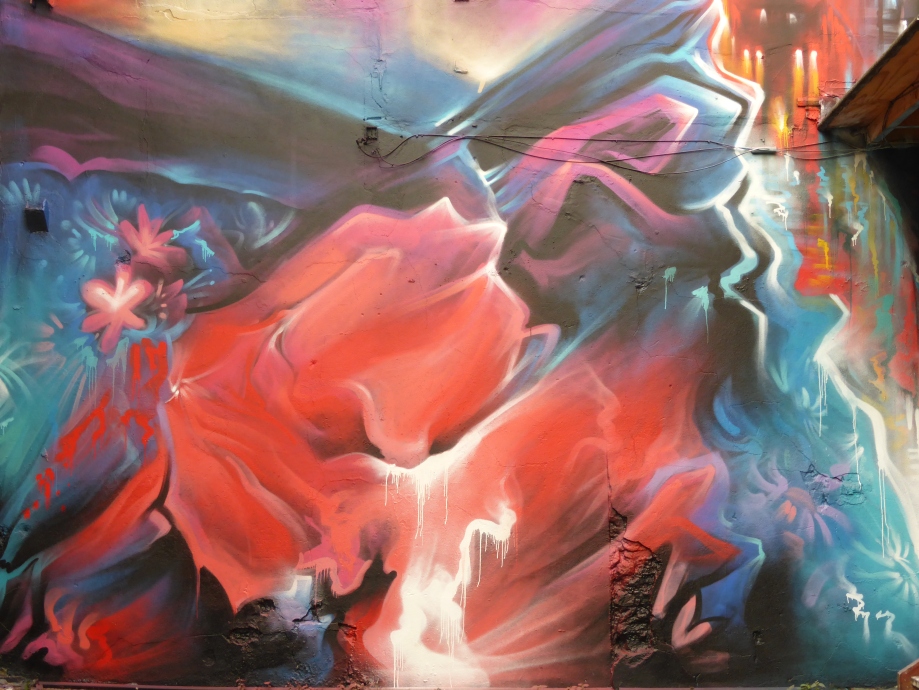 We love the details on the seemingly flowing Kimono, this central aspect really looks like a flower, adding another sense of life infused in the mural and demonstrates a superb use of shadows to create the folded effect. 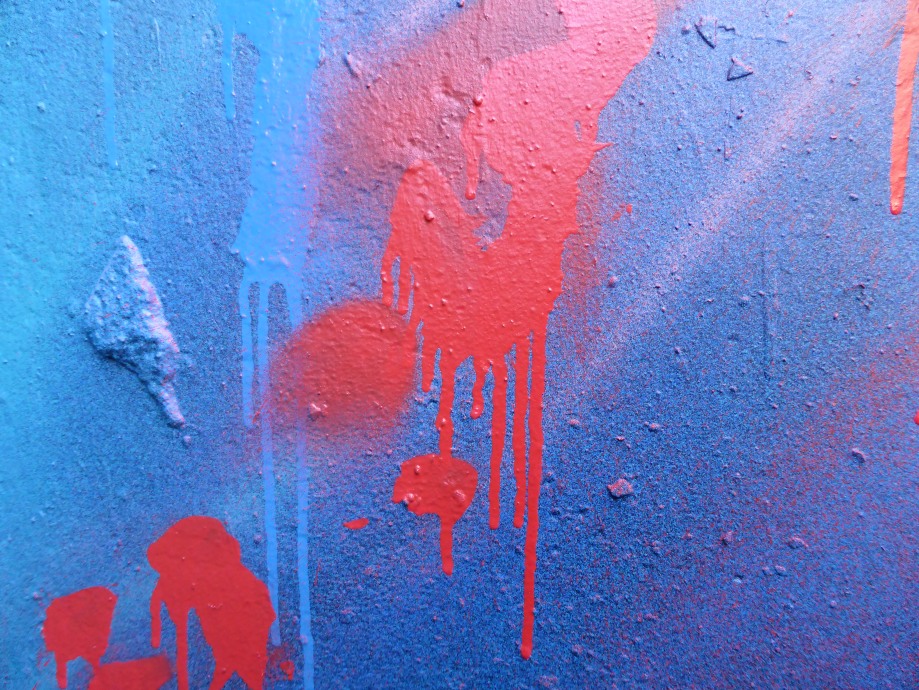 Extreme close-up which offers a glimpse in the some of Dank’s painting style, with the drip effect created by direct solid bursts of the spray can, surrounded by the more loose and fluid red mist effect from the more casual and flowing application of paint. 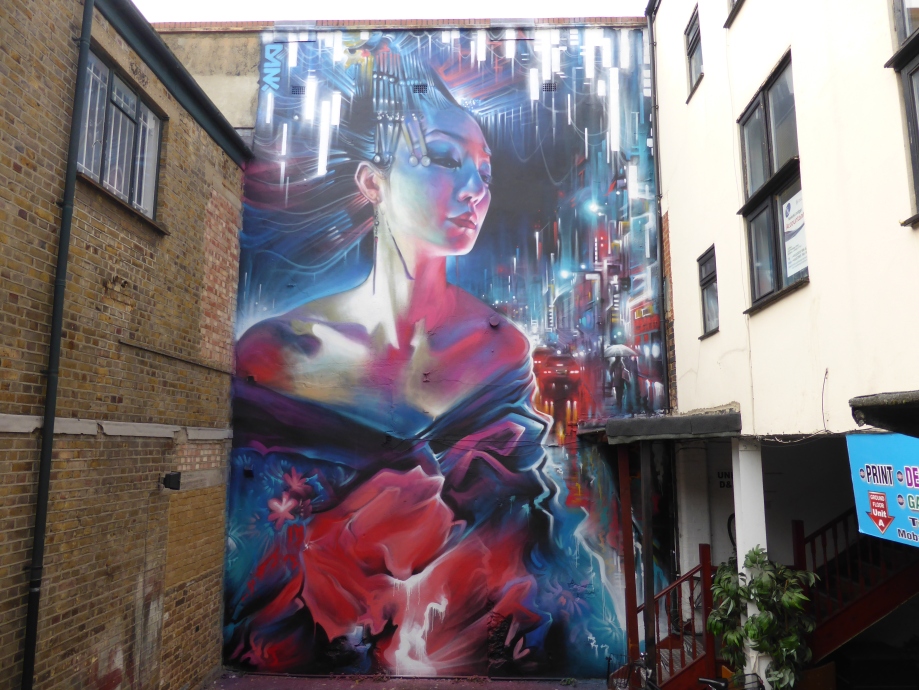 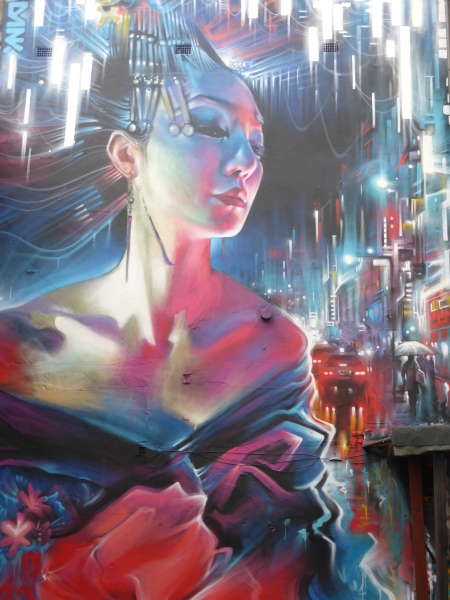 A few weeks earlier Dank had been down to paint the gates to the gallery (covered here) and it’s great how from this viewing point  the cars on the gate take the same course of direction as the traffic on the right of the larger mural behind it.