Here we wanted to share some of the moments from the absolutely amazing day we had on our recent ‘Anythings Better Than A Blank Wall’ Street Art tour of SprayExhibition20 in memory of Gordon Gibbens who we recently learned sadly passed away in 2017 aged 86 after spending the previous two decades documenting graffiti and street art around London and beyond. In 2012 Gordon was diagnosed with Cancer and spent the next five years never giving up on his love of getting out and about to photograph some fresh works. The inspiring story of Gordon Gibbens has been told in a beautifully put together book entitled ‘How Graffiti Saved My Dad’s Life (At Least For A While)’ by his daughter Jane Murphy which tells the story of her Dad’s love of Graffiti & Street Art. The book tells a moving story with such love, strength and humour and all accompanied by a fantastic selection of some of Gordon’s photos. All proceeds from the book are going to St Christopher’s Hospice from where Gordon made some of his final graffiti ventures and the tour we put on was to raise funds for the hospice. You can learn more about Gordon’s story (covered here) but the book is definitely worth getting for the true insight in to Gordon’s determined character.

When we first started the project in 2016 we had very mixed reactions from the townsfolk – who we are delighted to say by and large love what’s happening now and are very positive about the project – but in 2016 only a handful of dear photographer friends of ours had come down to visit SE20 to see and photograph the newly emerging artwork in Penge. The very first people from around Penge we turned around and unexpectedly saw taking a picture of an artwork, enjoying what they were seeing was Gordon, his daughter Jane and son-in-law Tom photographing Airborne Mark whilst he painted the very first wall for the project just 2 months in and only the 4th artwork of the 199 to date. These guys were the first locals we saw appreciating what we were setting to do with the artists help, a moment that made us think yeah it’s well worth it when a painting can stop someone in the street and brighten their day or even make someone travel out of their way to see something special. We were so moved by Gordon’s story and how much the artworks we were organising in Penge and Croydon meant to him and his family at a time when traveling about was becoming increasingly challenging that we dedicated our recent 4th Anniversary celebrations to a wise man who knew that “Anythings Better Than A Blank Wall” (covered here). Thank you Gordon Gibbens for putting such effort to come and see and share the art from Penge, especially at a time when very few people were doing so.

So where to begin, firstly with the overwhelming number of people who showed up with over 50 people joining us over the 4 and a half hours walking around Penge’s artworks, comprising people attending from Penge and the neighbouring towns as well as those who traveled from far and wide with people making the trip from as far as Nuneaton Bristol, Edinburgh and even Brussels for the day. It was also lovely to see the diverse group who joined us, young and old and even a couple of dogs, there was something for everyone to enjoy.

We have to say with the weather we got the full Street Art hunter experience, starting with blue skies and glorious sunshine casting shadows on a couple of the first works seen. Then over the next few hours the sun decided to thankfully disappear behind some clouds and we were treated to strong winds, torrential rain and hail stones – utmost respect to the 20 or so attendees who stayed to end and endured the final 20 or so minutes of the tour and didn’t even consider leaving amid the onslaught of icy water that befell us, what rain? – well it wouldn’t of stopped Gordon!

In addition to all the artworks we got to enjoy we were also privileged to have a couple of artists who have been painting in Penge the last three years bare the cold to come paint a couple of artworks for the occasion in memory of Gordon, one of which by Airborne Mark has been kindly dedicated to Gordon Gibbens and will stay as his wall in Penge. Massive Thank you to Airborne Mark and Giusi Tomasello for turning out in the cold and creating the beautiful artworks.

In all we had an absolutely wonderful time – it’s rare we get to actually see most of or all of the artworks scattered around SE20 in one go – and to share it with so many people interested in the artworks. The day was full of much love, fun and an abundance of high quality artworks. In all the day exemplified why running this project in Penge is so rewarding, we had a few people kindly arrange to keep cars clear of a few spots for us  in advance and in two instances along Maple Road the car owners kindly moved their vehicle so the group could enjoy the artworks otherwise hidden, thank you all for ensuring Penge’s art is seen and enjoyed! We also attracted the attention of a resident in Southey Street who came out to see what the crowd was in aid of and upon finding out dashed back in doors and came back out with a donation to the hospice. It’s lovely running this project here.

MASSIVE THANK YOU to everyone who turned out to enjoy the day in memory of Gordon and all the more so for the exceptional generosity all who attended showed who helped raise £377.20 including a further 16 book sales of ‘How Graffiti Saved My Dad’s Life (At Least For a While)’ with all proceeds going to St Christopher’s Hospice in neighbouring Sydenham from where Gordon made some of his final Graffiti ventures. We had one of the best days we have spent on this project with you all. At current in all Jane and Tom have with a little help from some friends raised £1,151.31 for the hospice – WELL DONE GUYS! You should be proud.

The beautifully presented book is only £6.99 with all proceeds being donated to St Christopher’s Hospice in Sydenham, South London. So not only is it a moving and inspiring story full of great pictures and superbly written, it is also for a good cause. Should you be interested you can purchase your copy here: 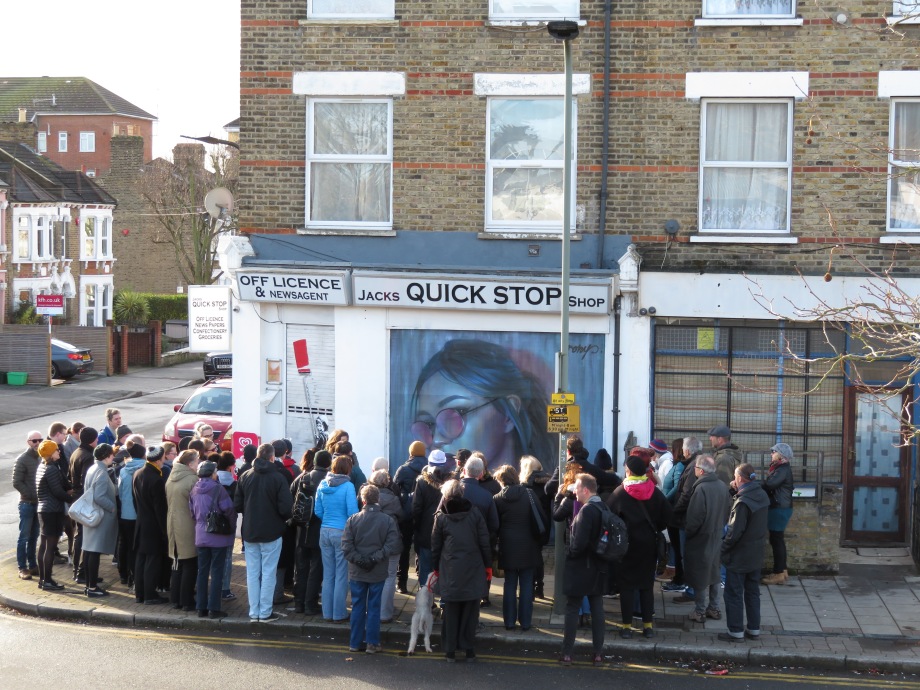 First stop on the tour discussing works from Dotmaster and Irony in Station Road, the latter of which was recently placed up for the Paint Jam we dedicated to Gordon and so the ‘Anythings Better Than A Blank Wall’ around Penge began.

Seemed one problem with such an amazing turn out was that we obstructed the entire pavement and even impeded some of the traffic in the roads also in order for everyone to see some of the artworks, as proven here while discussing ‘Oh, Hello Molly’ by Sr. X in Maple Road. 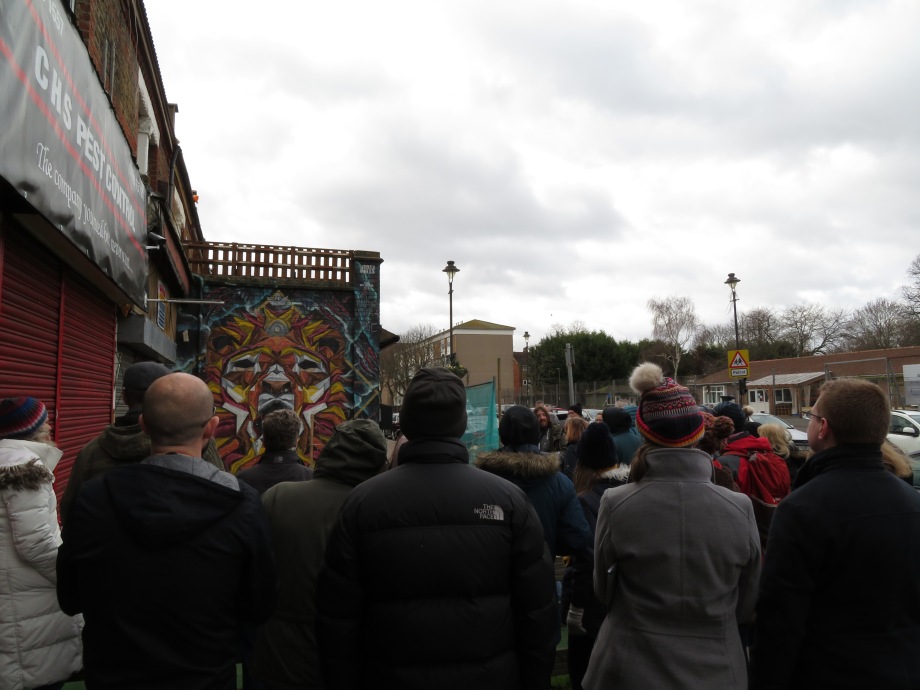 Discussing ‘Aslan’ by Airborne Mark in Maple Road – the third actual wall we got to get painted in Penge in the summer of 2016 and featured in ‘How Graffiti Saved My Dad’s Life (At Least For a While)’.

Discussing the layering of colours in this CMYK dot painting from Dotmaster in Padua Road. 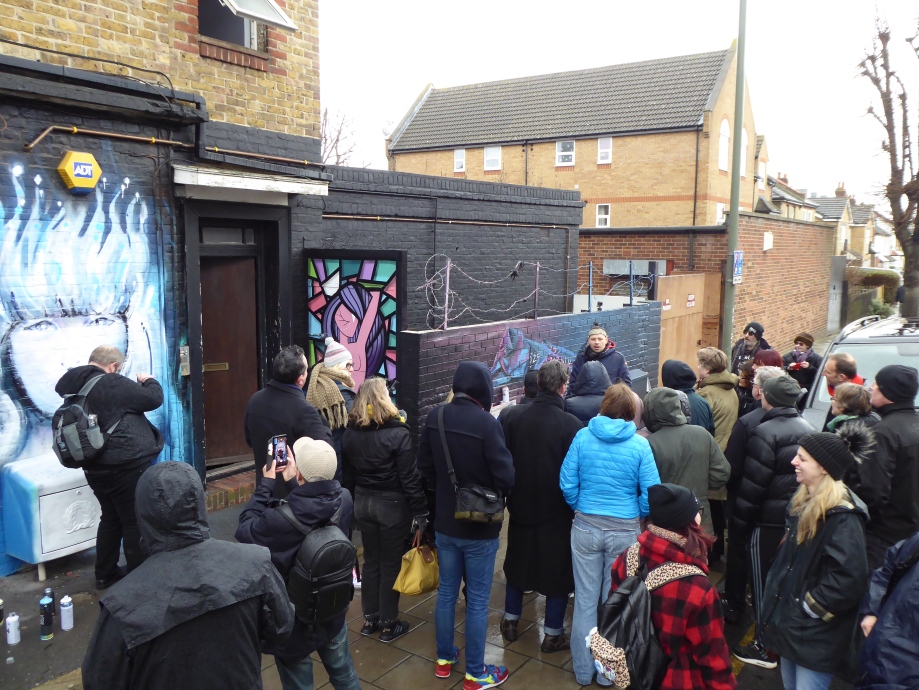 Airborne Mark taking time out from his work to discuss his folds and why he was putting the work up in memory of Gordon Gibbens to the amazing crowd who turned out for the day. Work-in-progress from Giusi Tomasello and work from DRT x Coloquix in shot also.

It was about now whilst discussing these works from Dreph & Mr Cenz in Southey Street the rain and hail stones decided to really make an appearance. 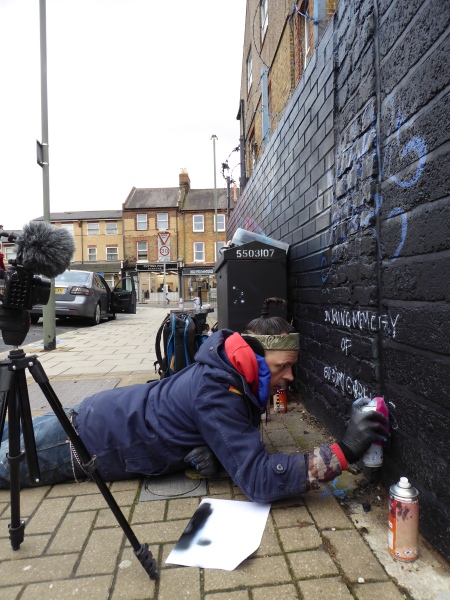 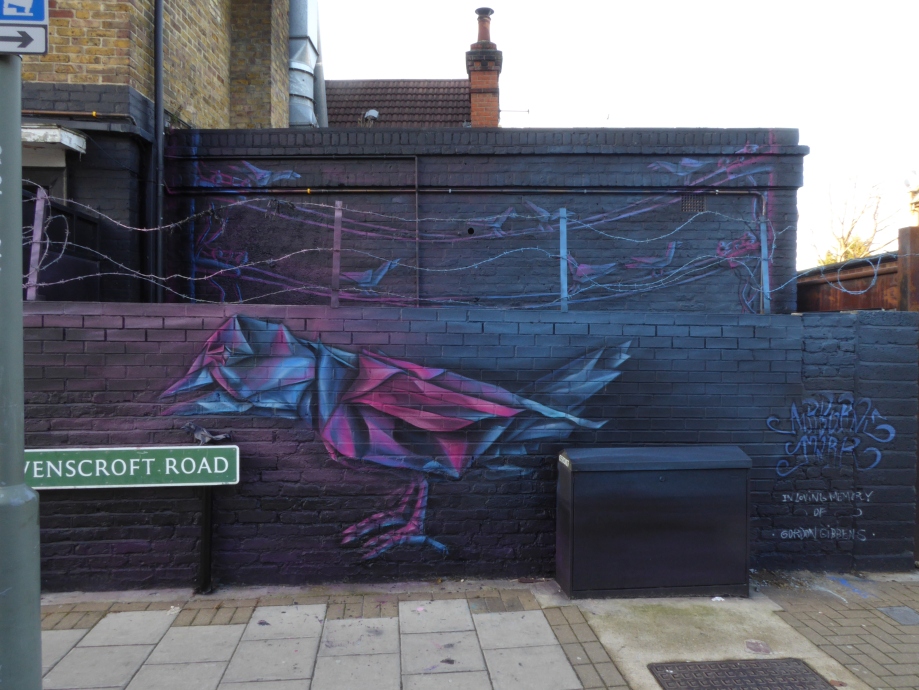 ‘Ravenscroft’ by Airborne Mark in Ravenscroft Road placed up “In Loving Memory Of Gordon Gibbens”. 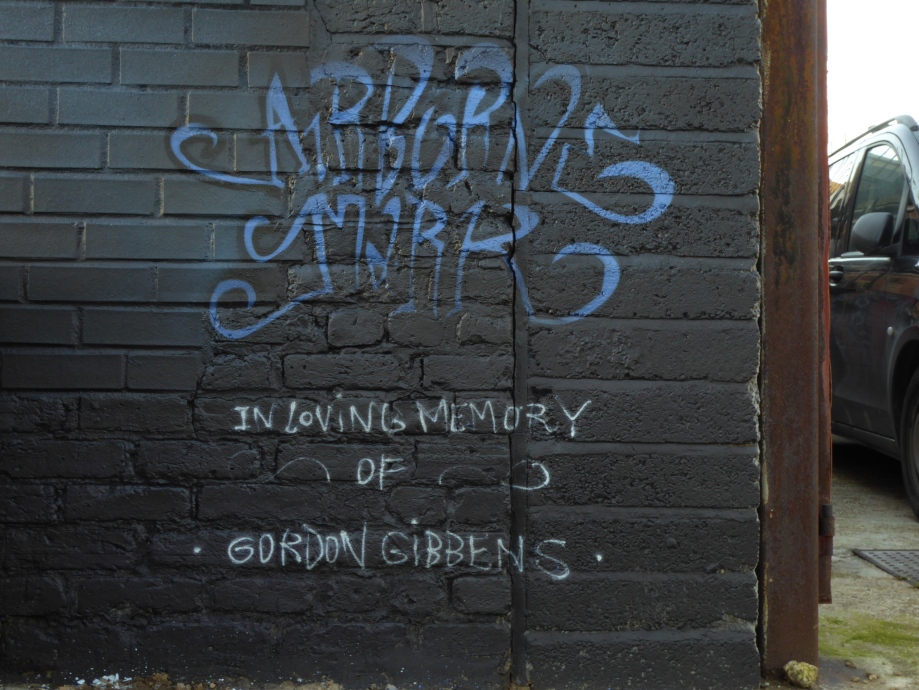 “In Loving Memory of Gordon Gibbens”. 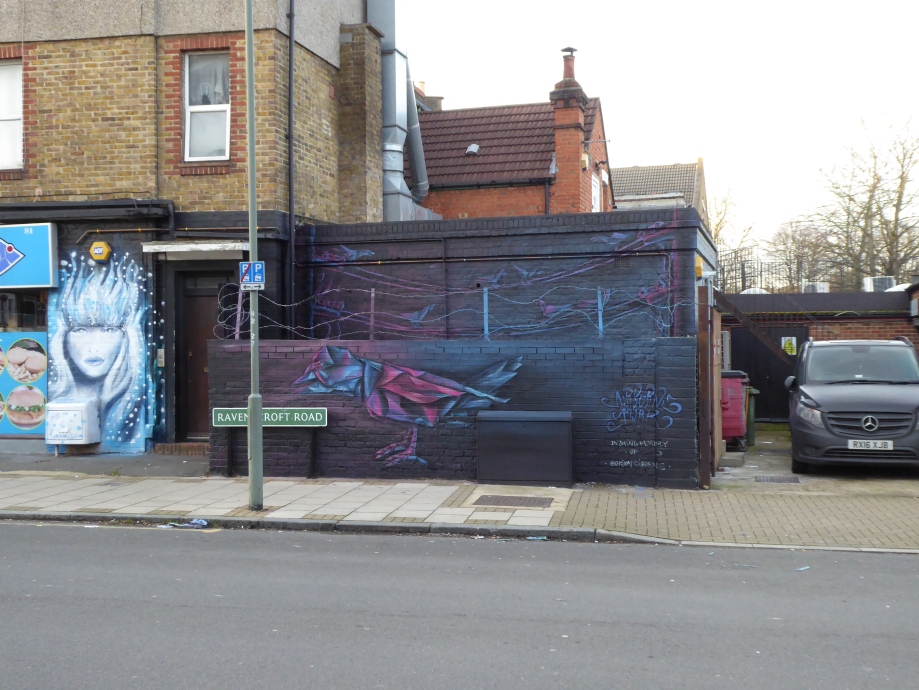