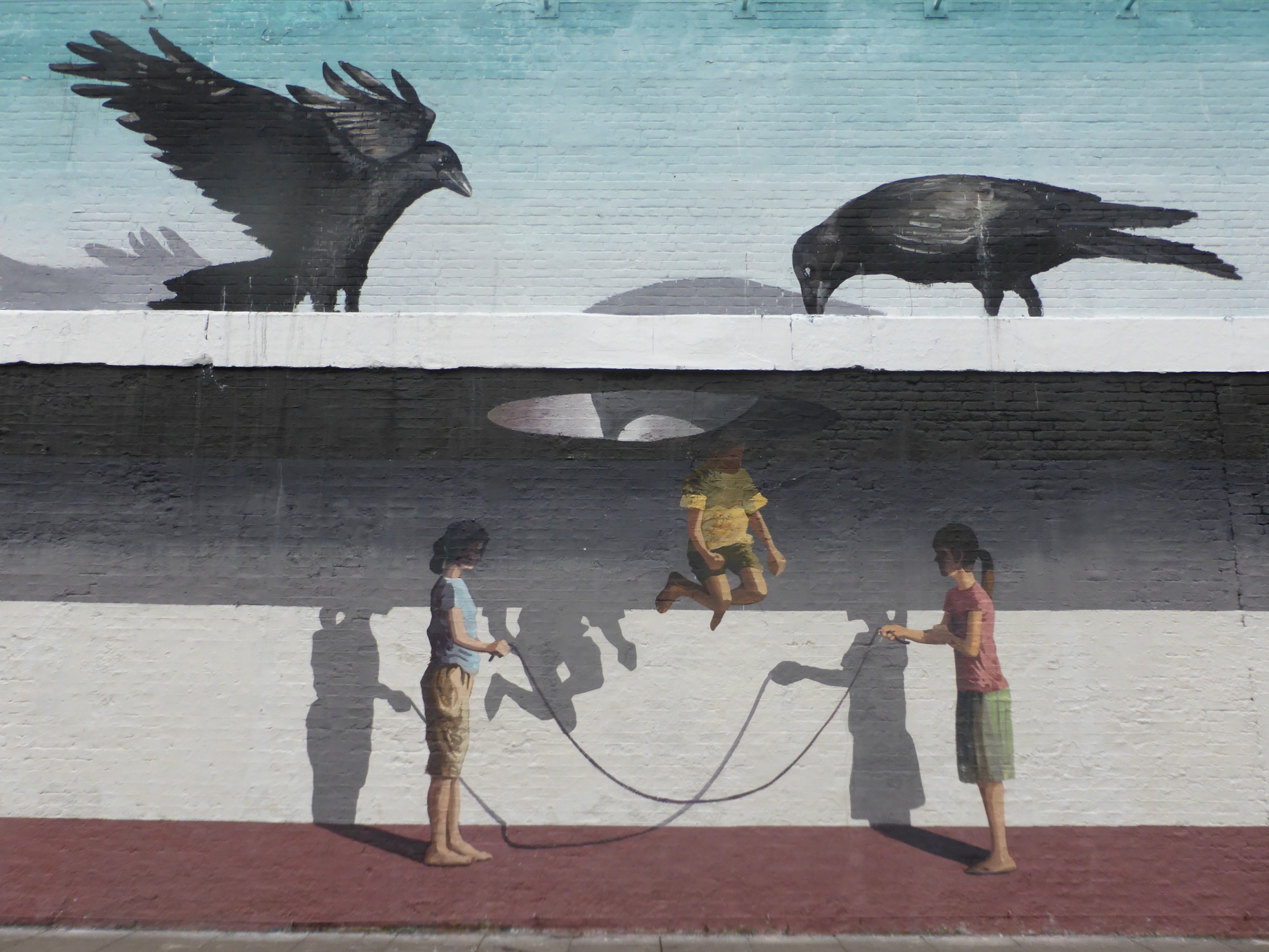 On Sunday Iranian artist Mehdi Ghadyanloo completed his work on the iconic Village Underground wall in Shoreditch. The piece had taken him over a week to create, with setbacks due to the heavy rainfall in London throughout the last week, but he stuck at it and what he has created is just incredible, a real spectacular piece of art and something exceptionally different to anything I have yet to witness on London’s streets. Certainly a piece I will not forget for some time to come. 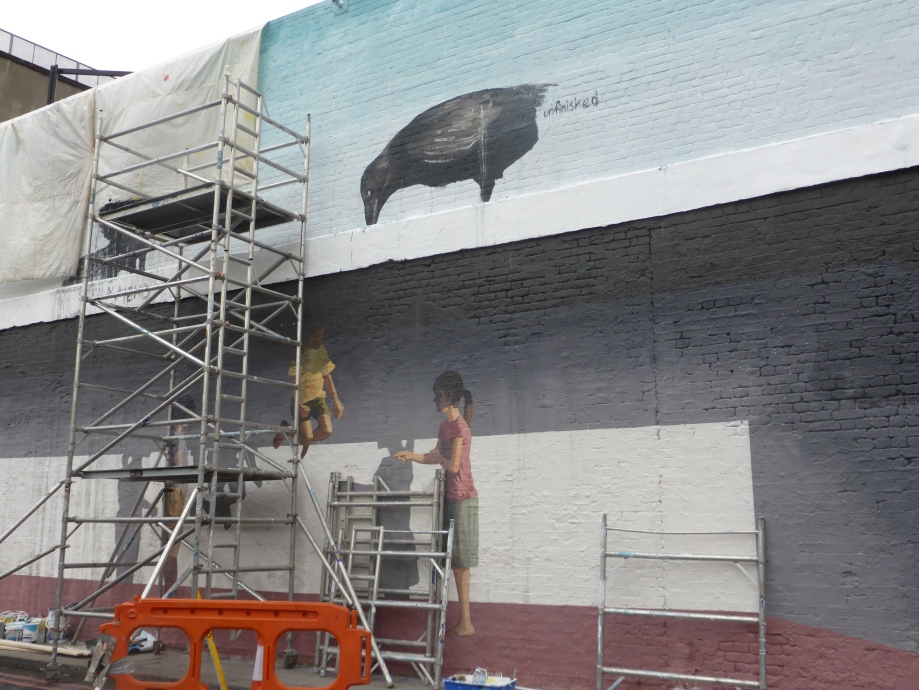 I love the surrealist touch of writing ‘unfinished’ next to the incomplete crow.

Born in Iran in 1981, Ghadyanloo worked as a farmer, before moving to Tehran and gaining a degree in Fine Art as well as an MA in Animation. Combining these two disciplines with his own approach to street art Ghadyanloo has gone on to become one of the most famous street artists in Iran. For the past eight years Mehdi Ghadyanloo has been involved with the Municipality of Tehran’s Beautification Scheme, promoting mural art in the city. For Ghadyanloo, street art is the perfect means to beautify his grey and polluted city. He achieves this through the use of bright colours on a hyper-real scale to create escapist, and surreal dreamscapes in which his images portray, through the art of optical illusion, impossible scenes and feats of gravity. 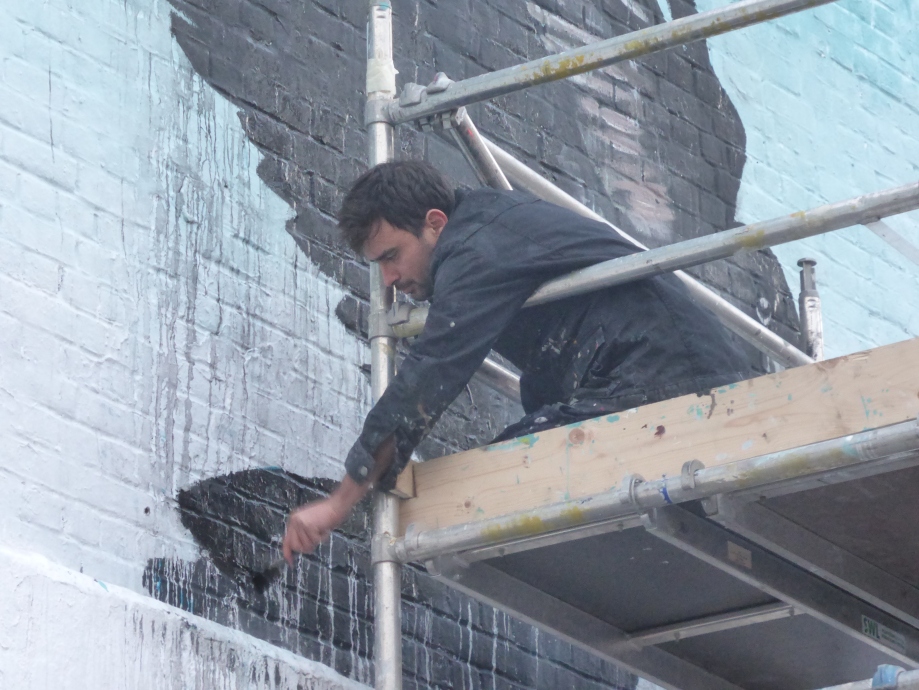 At work on Friday retouching the parts damaged by the recent rain.

His work is very much influenced by Surrealism and Symbolism and through this he sets to create playful and fantasy motifs to generate his own distinct utopia on the walls of his city. His murals reflect the surroundings and immediate environment, in Tehran he sets through his work to forego political commentary and focuses on the dreams and imagination, aspects of the self that permeate all cultures, politics and religions, a universal component in humanity.

Working away into the cold evening on Friday.

In contrast this work entitled ‘We Didn’t Start The Game’  takes on a much more haunting tone and it’s inspiration lies behind the horror of Alfred Hitchcock’s iconic film The Birds. In ‘We Didn’t Start The Game’ the three children are innocently playing skip rope unaware of the impending danger. In Iranian culture the crow symbolizes bad news and here they are standing over the children’s innocent world cut off from fear. Mehdi told me that this was the moment before danger struck, that in approximately five seconds time the kid skipping the rope will be snatched by a crow, shattering the children’s innocent world.

Working away on the finishing touches Sunday lunch time with the help of his wife who was seen to be helping fill in the gaps and touch up the work as well as offering advice throughout the whole process. 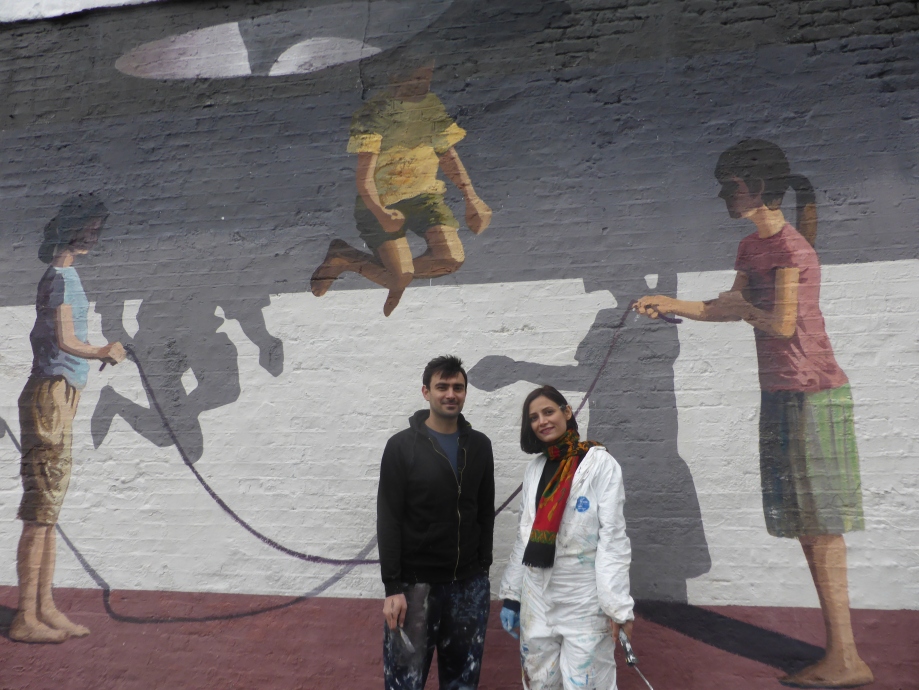 The pair standing deservedly satisfied and proud in front of the piece.

Mehdi standing triumphant with the tool of his trade. 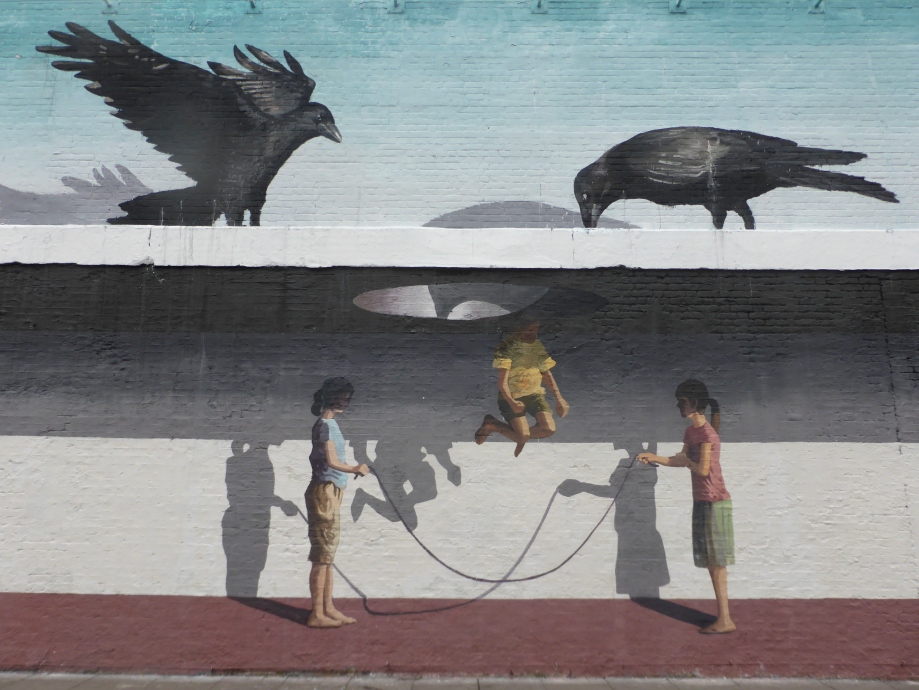 His use of depth and shadows to create perception altering pieces is just formidable, so much to see on a flat surface, one finds themselves just absorbed by the piece, looking directly into it, completely lost in the moment. The three walls Mehdi has painted in Shoreditch over the last two weeks are his very first works outside of Tehran. I feel privileged and grateful that it was in London and I was able to witness as well as get the chance to meet the man. He was an absolute pleasure to talk with, he was in great spirits throughout his work, despite the poor weather conditions, and more than happy to discuss his work with the many members of the public enamored with his work, including myself. This is an artist I sincerely hope we see again soon in the not to distant future in London, but just in case we don’t, be sure to go check out his works on Holywell Lane and Redchurch Street. You can see pictures of his other two works painted the previous week in the immediate vicinity (covered here).

Celebrating the finished work by immersing himself within the scene.

Mehdi’s exhibition ‘Perception’ opens at the Howard Griffin Gallery in Shoreditch on Thursday 26th February. I stopped by the gallery the other day and was fortunate enough to catch a glimpse of a couple of the works to be displayed in the show and they looked stunning. I will be heading to the exhibition as soon as possible and reporting back, but if you can go yourself, do so and you won’t be disappointed, Mehdi’s works are just sublime, offering so much to take in. I would finally like to say thanks to Mehdi for taking the time to chat and offering some insight into this truely masterful piece of art. Best wishes in 2015 with your trips to India, Norway and the US.

One comment on “Mehdi Ghadyanloo Paints The Village Underground In Shoreditch”